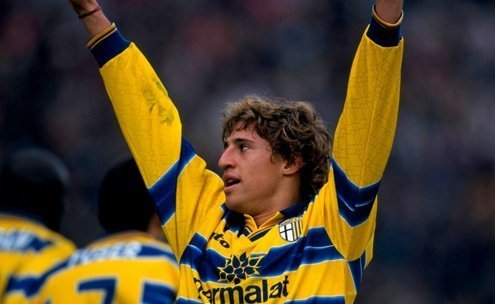 In the 1990s, when Parmalat owned the team, Parma was on top of the world, as was Hernan Crespo.
I

n the mid-1990s, Hernan Crespo symbolized a Parma AC side that became Italian and European football’s hipster darling. But since Crespo’s return to the club as youth team manager he has had to witness to something altogether different: the unsavory spectacle of the club coming apart. Parma officially announced bankruptcy in mid-March. Its senior team hasn’t been paid since last summer. Crespo’s players have even struggled to find hot showers.

Returns on the pitch have also been in arrears: after three successive top half finishes, Parma sits deep in last place. Parma fans would see starting next season in Serie B as a blessing but court rulings could plunge the club into amateur ranks.

The term “hipster” as we know it now didn’t exist when Crespo burst onto the scene en route to becoming Parma’s all-time top scorer. Nor was there legislation governing the finances of European clubs prone to free spending and fraud.

A rich patron could prop up a small team, watch it rise through the ranks overnight, and then crash and burn even faster. That’s just what triggered Parma’s first collapse, which ended the glory years of Crespo and others.

Though the team’s latest collapse isn’t tied to its first tailspin, both are cautionary tales that shed light on the progress and the pitfalls surrounding recent efforts to stamp out financial malpractice in big-time soccer.

Until 1990, Parma was like many other affluent, small northern Italian cities with middling football clubs that spent decades yo-yoing between Serie B and Serie C. But when Parma won promotion to Italy’s top league in 1990, cash from food giant Parmalat, its owner, attracted Crespo, Faustino Asprilia, Gianfranco Zola, Fabio Cannavaro and Lilian Thuram to the club. In 10 seasons, Parma won eight major Italian and European trophies.

In 2003, however, prosecutors discovered a €14 billion hole in Parmalat’s accounts, a revelation that ultimately triggered the largest bankruptcy in European history. By 2004, the football club was declared insolvent and forced to re-form as Parma FC.

The decade that followed the bankruptcy still produced respectable on-field results. Parma was relegated for one season in 2008-09, but managed a handful of top 10 Serie A finishes despite diminished resources. In fact, former owner Tommaso Ghirardi, a steel and engineering parts baron, was heralded a boardroom genius as recently as last year for his distinctive and revolutionary approach to the transfer market.

In 2011, UEFA introduced Financial Fair Play rules forcing clubs to balance their books. Smaller outfits with smaller fan and revenue bases had their player spending limited. Ghirardi had seemingly kept Parma punching above its weight by signing up hordes of young or out-of-contract players from lower leagues at zero transfer cost, then farming them out to a network of smaller clubs in Italy and Europe. The goal was that 30-to-40 percent of these players would appreciate in value, either making the first team or being sold at a handsome profit.

Pundits eagerly pronounced the move as a cutting-edge Moneyball-esque approach to soccer management and recast Parma as hipster favorite. If only Ghirardi wasn’t struggling to pay his bills. In 2013, the club had roughly 300 players on its books. While many had been acquired at no cost, they still had salaries, which grew as young players developed. Simply put, while Parma was making hefty profits in the transfer market, the gains couldn’t offset the club’s overall cost-revenue deficit.

UEFA recommends clubs spend no more than 70 percent of revenue on player wages. Parma’s ratio — until it gave up on paying salaries — was nearly 90 percent. This pan-European player cattle market saw the club’s debt increase from €21 to €144 million in the six seasons between 2007 and 2014.

In summer 2014, UEFA banned Parma from forthcoming Europa League competition. Parma’s sixth place Serie A finish was voided for having withheld €300,00 in income tax. Suddenly, the club’s precarious but low profile financial woes were exposed. Worse for Ghirardi, the Europa League ban also cut out participation revenue —Fiorentina and Lazio made an estimated €8-9 million from their 2013/14 Europa showing — a devastating blow for a club with a (likely under-reported) wage bill of €21 million.

Though UEFA’s strict new rules have helped rein in runaway spending and allowed for the punishing of clubs that can’t pay their wages, the Parma case shows their limits. UEFA’s sanctions were applied in 2014 with bankruptcy following a year later. But Parma’s wheels had begun falling off well before anyone got involved.

In early March, former Parma player and now team manager Alessandro Melli wrote a scathing open letter to Ghirardi on Facebook. He claimed that in 2009 Ghirardi had promised players a bonus for winning an important match, only to call Melli and ask for a €100,000 loan finance the prize, citing lack of liquidity. According to Melli, it took Ghirardi three years to pay it back.

Interviewed after finally selling the club in December 2014, Ghirardi labeled the Europa League ban “a lifetime sentence for speeding.” He was referring to his failure to pay several hundred thousand euros in income tax, not the later revelation that he failed to pay his players entirely.

It’s impossible to know how long Parma’s plight would have remained concealed had it not been for UEFA’s intervention. But however much (or little) it knew about Ghirardi’s house of cards, its slow response time and complete lack of intervention by Italian domestic bodies in the build-up to the UEFA action demonstrates the extent to which fans and players still exist at the mercy of owners.