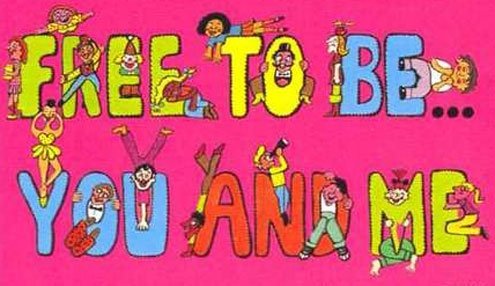 y the late 1970s feminism had settled in to the nooks and crannies of American society. And while I couldn’t burn my bra, because a.) I wasn’t old enough to wear one; and, b.) I couldn’t play with matches, I could sing along with Marlo Thomas and her “Free to Be You… and Me” after-school music special that highlighted the new roles taken on by American women.

Though we weren’t turning the pages of Betty Freidan at Montpelier Elementary (Gloria Steinem was more our speed), we were learning that women were no longer just homemaking-kid-caring-for-machines.

Thomas, Freidan and Steinem weren’t the only ones trying to empower young women. My parents also taught me the sky was the limit. “Well, girls can’t do that!” didn’t exist. Though my mother didn’t hold public office or manage a Fortune 500 company, she forcefully parlayed the empowerment message.

She was what’s now called a “stay-at-home” mom. She even belonged to the local chapter of The Homemakers of America. Like the now-antiquated June Cleaver, she held down the fort. Only she didn’t wear pearls. Instead, she mowed the lawn wearing a tiny terrycloth jumpsuit that neighborhood boys seemed to like. That’s feminist, right?

My generation, later to be dubbed “X,” produced the first “latch key” kids, those who came home after school to find the house empty because father and mother were both at the office. Between Marlo Thomas and Karen Meadows (more on her in a moment), an my mother’s exhibitionist gardening tendencies, I soon became hyper-aware that my mother did not work.

Returning home to freshly-baked cookies one day, I huffily asked my mother why I couldn’t have keys to the house.

“Because you don’t need them,” she replied without breaking stride. “You are eight years old.”

Time to play the friend card. “Karen Medrow has keys and her mother works,” I said condescendingly.

For me, Karen Medrow was the luckiest girl I knew, I told my mother. No, maybe it was Monique Berger. She had a Christian mother, a Jewish father and was adopted from China, which meant that she got presents for Christmas, Hanukkah and the Chinese New Year.

But since Karen was an only child, her parents gave her gifts all the time, and she had a bedroom that contained more unicorns than anyone else in Mrs. Scarselli’s third grade class, and I thought her parents were the greatest thing since the invention of the Smurfs. Not to mention that Karen had the coveted key to the house.

I followed my mother to the laundry room and continued my assault as she folded clothing.

“Thank you,” she replied.

I finally had to the heart of the matter. “I mean, it’s not like you do anything all day. You stay home and get to eat whatever you want all day.” I paused. “Why can’t you get a job?”

She said nothing, moving some clothes from the washer to the dryer.

“I just think you are capable of so much more,” I told her in my well-informed way.

My mother still said nothing.

In fact, she didn’t say anything until a couple of months ago, when were chatting via videoconference, which we do a lot.

After the obligatory baby-viewing and the toddler chatting I informed her that I didn’t really want to go back to work this year.

“I just feel like with two kids, a house to run and working… something will suffer. And besides, the boys will only be little once… and they need me now… and time goes by so fast.”

I was seeking her approval and pretty sure I’d get it.

“I think that’s great,” she said finally. “That way you can sit home all day and do nothing.”

Having conveniently forgotten our 30-year-old exchange I was taken aback. “Are you kidding? I am a personal lady-servant! I cook. I clean. I nurse. And I don’t have a clothes dryer!”

“I just think you are capable of so much more,” said my mother.

Finally, she laughed. “Those are your words – not mine.” She then reminded me of that fateful laundry day. “I waited a very long time to retell those words.”

She’d gotten the last laugh. I ate my words.

Ironically, it’s feminism, along with good fortune, that’s allowed me to choose to be the homemaking-kid-caring-for-machine that dreaded all those years ago. I know now that what I have is both luxury and a blessing. It’s also more challenging than any professional undertaking.

When I have “critical mothering moments,” i.e., vomit all over my Volvo or wee hour teething tantrums, I think to myself: “Karen Medrow isn’t the only lucky one.” I then I jingle my very own set of keys.