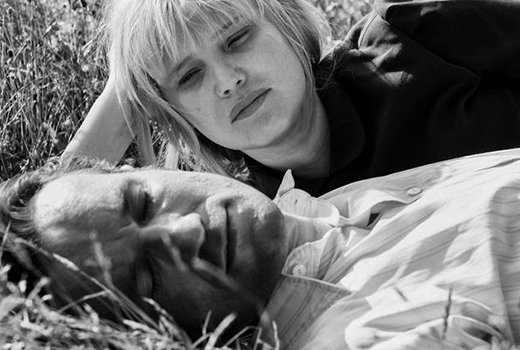 n a year in cinema dominated by both race and films “based on a true story,” “Cold War,” filmed in black and white, seems a throwback to the fraught, impassioned, star-crossed, noir-like love-and-sex stories of earlier eras: “The Indiscretions of an American Wife” (1953), “Last Tango in Paris” (1974), and perhaps especially the many versions of the tragedy of Romeo and Juliet, though the problems faced by Wiktor (Tomasz Kot) and Zula (Joanna Kulig) go well beyond the family squabbles of the Montagues and Capulets. Of today’s love stories, it most resembles “A Star is Born,” though that film has a clear, familiar narrative. “Cold War,” to its credit, does not.

The opening scenes present Wiktor and his colleague-girlfriend Irena (Agata Kulesza) functioning like Alan Lomax in the Mississippi Delta, scouring the Polish countryside for teen-age boys and girls who can dance and sing in “authentic” folklorish fashion. They (or, it might be said, Wiktor) pull the blond, sensuous, gifted city-girl Zula (“a bit of a con”) from the crowd of aspirants. The company is assembled, and Wiktor, a talented musician, takes on the role of musical director. As expected, he also becomes intimate with Zula, initiating a love affair that will span more than 15 years — 1949 to 1965 — and that will find Wiktor and Zula dealing with their relationship not only in Poland, but also in Berlin, Paris, Yugoslavia, and a gulag.

Director and screenwriter Pawel Pawlikowski (“Ida,” 2013) instead uses the plot’s complex interstices to lend the story nuance, mystery, and unpredictability.

The chronological and geographical scope of the film would be a challenge to any director, and some viewers may find the abrupt transitions in time and space confusing, irritating, or simply insufficient. Director and screenwriter Pawel Pawlikowski (“Ida,” 2013) instead uses the plot’s complex interstices to lend the story nuance, mystery, and unpredictability.

On one level, “Cold War” is the simple tale of two people in love, struggling with the boundaries and vagaries of Iron-Curtain, cold-war Europe. But Wiktor and Zula’s frustrating, often centrifugal relationship is as much a product of their differences as it is of politics and borders. Wiktor is quiet, educated, pensive, even-tempered, and cosmopolitan, assured in his ability to live comfortably in the West, willing to commit to an existence that’s reasonable if not perfect, and he’s 20 years older than his lover. Zula is emotional, uneducated, insecure, prone to outbursts (“Michael fucked me 6 times in one night, what about you?”), bound to place and culture in ways she hardly understands, and, for reasons that are not entirely clear, unwilling to commit to the Western artist-garret life that Wiktor offers. 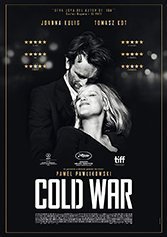 Wiktor plays jazz piano at “L’Eclipse,” a Paris club. Zula sings jazz, and even records in French a jazz LP, which she impetuously tosses into the gutter, calling it a “bastard” because she understands the music is not authentic to her. She seems happiest and most exhilarated dancing to Bill Haley’s “Rock Around the Clock”; the jazz and rock arguably providing a metaphor of the lovers’ generational differences and of her youthful sexual needs.

The film’s disjunctures and tensions — which are real yet modulated, in contrast to those of a horror film or a le Carré story — owe much to these dichotomies. They also emerge from the here-and-there, somewhat menacing presence of another character, Kaczmarerk (Borys Szyc). Unlike Wiktor and Irena, who are intellectuals with Western sensibilities, Kaczmarerk, the manager of the folk dancing troupe, is a plodding Communist Party apparatchik. Though no villain, he’s by no means likeable, and his relationship with Zula could be seen as disgusting. But unlike the protagonists, he is practical, attuned not only to his own unpalatable lust but to the Party’s goals and needs.

Lukasz Zal’s cinematography is exquisite and Kulig is superb in a difficult role that explores Zula’s multi-valent personality. But some may find “Cold War” an interpretive nightmare, full of unexpected, and often inexplicable, or even perverse, twists and turns. It’s better to think of this quality as a virtue. As we left the theater, a group of 20-somethings stood in the lobby, debating why Wiktor had decided, fatefully, to return to Poland. That questioning is what makes a fine, innovative film — an apt description of “Cold War.”