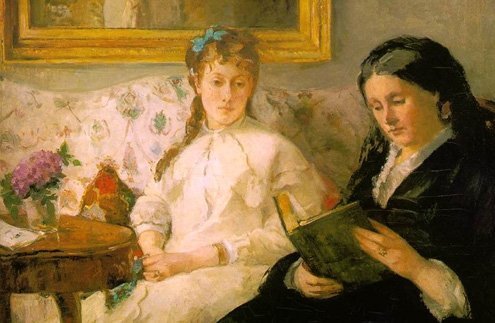 She hails from galaxy far, far away.
I

’ve come to accept the fact that Fabio will never be completely loyal to just one woman, Like it or not, I will always be “the other woman” in his life. That’s the package. Take it or leave it.

The idea of being in constant competition with l’altra drove me up the wall. For several years I struggled with having to share Fabio until I just threw in the towel.

Non c’è niente da fare. It’s hopeless. Fabio will always be a mammone. And Mamma will always have her say. Always.

It was tough at first, figuring out one another’s space and place in his life all the while butting heads. Our cultures and age difference clashed. She ran the household, a real queen of her domain (my own parents always shared the throne, split everything down the middle.) Our lives and way of thinking couldn’t have been more different. But the one thing we could agree on was that we both loved Fabio. And Fabio loved us.

So we had to make it work.

Often, Fabio left us to duke it out, afraid to show favoritism. Much the way my parents split the chores, Fabio split his love and affection.

Once, I asked him to wash the dishes after a long hard day’s work. I was tired and he was willing. Throughout his adult life, he’d lived with women alone (mother, sister and cousin) and never picked up a sponge. But he got to scrubbing. Until Mamma came home.

Mortified that her son’s hands would actually be used for anything other than pulling teeth (he’s a dentist), she laid into me. It went on for months. How dare I allow a man in Italy to wash dishes. Light years can’t explain the culture gap. We fought. We traded barbs. I warned Fabio I’d walk out on him if she ever insulted me again. I was sure I’d prove my way to be right and she’d come around. I’d eventually stop being the Miami straniera who was dating her son.

But when the respect came, it came in earnest. She showered me with gifts and called me regularly. Since the thaw, we’ve shared many a champagne toast at the apartment I share with her son. Finally, I thought I could relax and be me. We’d now understand one another. We’d be more tolerant. The door to the mother and daughter-in-law friendship was open. Formality would end and she’d allow me to call her by her name and not the ritual signora.

This at least is what I thought, or hoped.

The other night on the phone, Fabio’s mother mentioned that her husband was at a dinner with friends. I asked (or hinted rather) that the next time, she should organize a separate dinner with her

“No,” she stormed, “the woman is supposed to be a good wife and a mother that stays home and looks after the kids.”

Since I’m not yet in either of those categories I was confused. “A man needs his space and I give my husband that,” she added. “And you know what? He always comes back running to me. Always.”

Fabio, overhearing the tone of her voice, walked out of the room.

But the lecture wasn’t over.

Men need their space, she went on. Nor should women necessarily be allowed much of it.

“Even if Fabio were to see 100 women at a time, he’ll always come back to you, and you know why? Because he’s in love with you and so you have nothing to worry about. So, give men their space.”

All this because I recommended that she consider a girls’ night out. All of which reminded this americana that she still hails from galaxy far, far away.