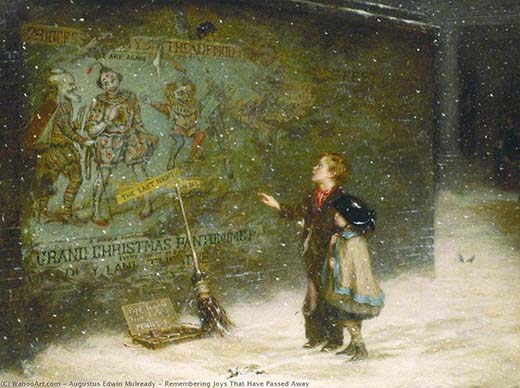 "Remembering Joys That Have Passed Away," by Augustus E. Mulready, 1873: when death and sentimentality join forces.
M

y youthful world was one in which no one “passed,” let alone “passed away.” They either “faded away,” as Gen. Douglas MacArthur once said of old soldiers, or they took the rather more direct route and just died.

Dying seemed to me far more realistic an event, like the extinction of dinosaurs; it happened to you when nothing more could. Death took you slowly or quickly, but after it made up its mind, and aside from funerals (which the dead attended in body only), that was that.

My planet was admittedly bereft of faith’s reams of writing about afterlife tourism, to which “passing” was a pass. Passing away was not to die, God-forbid (literally), but to cross a suspension bridge to some inevitably cloudy other side — assuming you weren’t Hitler or played for the Damned Yankees.

No phrasing was more deplored by my agnostic father, who (like wire service editors to come) preferred getting to the honest point of things, which “30 pass in jet crash” didn’t quite manage. To my father and my later editors, to use passing away as a means of describing death was a waste of a verb and adjective better suited to Ferraris overtaking Fiats and travel to exotic (cloudless) places far from home. To get “away,” you drove or flew, not passed.

The stiff-upper-lip men of my Vietnam-era boyhood had little patience for newfangled euphemisms: “collateral damage” to mean pulverized civilians.

More to the point, how many miffed lovers had lashed out with the line, “I wish you’d just… pass away!”

Perhaps this now-antiquated resistance to death described as a benign migration reflected a more secular and less sentimental period, perhaps conditioned by battlefield death — I came of age only 20 years after the end of World War II. The stiff-upper-lip men of my Vietnam-era boyhood had little patience for newfangled euphemisms: “collateral damage” to mean pulverized civilians or “protective reactions” for outright military assaults. Nor did they much take to poison-pen emotionalism, in which 21st-century social and political media revels at every turn. In war, soldiers and civilians, seamen and aviators, often died parsed to bits by lethal heavy metal uninterested in making room for passages.

No one passed at Auschwitz or in Nagasaki.

The American poet Randall Jarrell, who flew wartime bombing missions, pulled no punches in his scathing “The Death of the Ball Turret Gunner,” which reads in full:

From my mother’s sleep I fell into the State,
And I hunched in its belly till my wet fur froze.
Six miles from earth, loosed from its dream of life,
I woke to black flak and the nightmare fighters.
When I died they washed me out of the turret with a hose.

And hoses, like bullets and bombs, knew nothing of passages.

War aside, people also died of cancer or heart attacks, people who these days are almost invariably said to have passed: fathers and mothers, sisters and brothers — all pass without ever dying. Ironic that such tip-toe speech comes at a time that is otherwise verbally meaner.

Some mass media, as if freshly baptized, has replaced the traditionally terse “has died” with variations on passage.

Never mind that no one knows just what the dead have passed into, or if they book ahead, maybe online, and might just pass back if they don’t like their lodgings.

True, mortality has never seemed more postponable than now, thanks to a culture of medical science that teasingly hints of placing death on hold. But when someone dies, such a stay of execution is debunked, and the abyss resurfaces, all the more reason to seek refuge in passing. Better to think the dead move on, scattered as ash or in some god’s safekeeping. Better death by another name than death itself, since to die is to put an end to hope’s loose ends, which, rational thinking aside, still terrifies the many who are all of us.