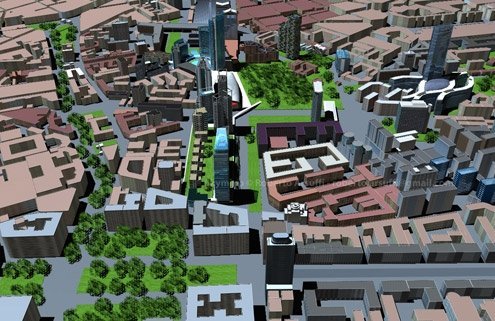 ne day last week, I wasted a lot of time. I’m a pro at time wasting and can avoid gainful work many ways, whether it’s taking on home-improvement and sewing projects or getting lost in online diversions. But that particular day I dawdled on my bike. I was doing errands and “October’s bright blue weather” bathed Milan in sun. Lingering was irresistible.

Tired of dealing with mad Milanese in machine (cars), I let my bike lead me. It sniffed out a new path, dodging concrete traffic dividers and defying the bike lane that died suddenly behind the Porta Garibaldi train station. I found I street I didn’t know and followed it up to what soon turned into a little hill opening onto a pristine piazza. Such elevation is rare in Milan.

It turned out the hill was really an overpass that ran over a busy road, with the piazza at the heart of the Porta Nuova real estate development, a sprawling project that covers 299,000 square meters and includes office, commercial, and residential buildings. Creating the public green space represented by the piazza was a concession city planners got from the developers.

The new hill is not the only transformation in the area.

When I first got to Milan in 1992, the area was a weedy field mostly used as a nomad camp and circus ground. It hosted an amusement park inhabited by carnie characters that would have scared even Diane Arbus. The two unfinished pink skyscrapers with post-modern flourishes towered above. Both were empty. Promoted by Bettino Craxi, the Milan Socialist leader and 1980s prime minister who gave Silvio Berlusconi his start, the towers were caught up in later corruption scandals and building came to a halt.

All kinds of rundown buildings with boarded-up windows ringed the whole of the area, like a crone’s last teeth. Tram tracks, the subway, and four lanes of traffic also tore through it. Two decades ago, when I happened to use a public phone in the area, used syringes crunched under my feet.

Anywhere else, such a centrally located plot would have been treated like the prime real estate it was, rather than a campground for junkies and nomads. Finally, the American developer Hines worked out a deal with several local transport authorities, hundreds of individual property owners, and the city of Milan and finally got to work overhauling the site.

I met Cesar Pelli, the project’s Argentine-American lead architect. He has five decades of urban development experience. The site, he told me, was the most complex he’d ever worked on. He had to take into account 11 transportation arteries (for cars, trams, metro, subway and railroad) and various elevation changes.

Charges of mob involvement didn’t help. Nor did squatters, artists and craftsmen (and drug dealers) who called the land their own. One little old lady refused to sell, holding up the entire project.

Today, children play in fountains on the old nomad camp. Grandparents take the sun at outdoor cafès. The Craxi-era towers are finished and occupied. Local storefronts advertise international retailers including Sephora, Muji and Nike. A ramp links the piazza with trendy Corso Como.

People who resist urban high-rises and plazas won’t like this project. And Milan residents will automatically cringe seeing fresh new surfaces for graffiti, which defaces so much already.

But on such a splendid day, nothing could diminish being up on high, in the sun, with the convivial tinkling of coffee cups and a mountain view in the background. It may have ages, but Milan had pulled it off, despite corruption scandals and the international financial crisis.

As I headed home on my bike, I vowed to make up for my daytime indolence by staying home that evening. Instead, I moved into time-wasting, chapter 2. I joined friends at “Swing ‘N’ Milan ’30 ’40 Original Vintage Dance Festival,” a recently-concluded weekend-long jag of retro dancing dreamed up by Matteo de Stefano, Luca Locatelli and Chiara Di Pinto, a dance teacher, event promoter and designer. They’d transformed a former pelota court into a dance floor flanked by stands that sold everything from vintage furniture and clothing to cupcakes and hamburgers. The evening included a communal dance lesson followed by dancing to a band playing Italian and American music from the 1920s. Who knew Milan harbored a so many people who like wearing zoot suits, red lipstick and stockings with seams? And who would have imagined so many college kids, retired and gay couples, impoverished noble socialites and young professionals dancing the Charleston all night?

Rare for Italy, the event was completely self-styled. Even rarer, the crowd paid little attention to the norms of bella figura. The event wasn’t about class or ideology. Instead, it was a bunch of people looking to have a good time.

These days, Milan — like most of Italy — can feel discouraged and cynical. Over the decades, Milan has often heralded Italy’s future, sometimes with dubious results (industrialization, fascism and Berlusconi all began here). But as I cheerily Charlestoned my way home, I hoped the coming tune might finally be different. “Time you enjoy wasting isn’t wasted,” John Lennon once said, and on this October day, which started with a bike, he had a point.

— For more on Porta Nuova and Swing ‘N’ Milan, which plans to become an annual event.