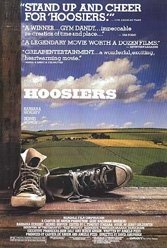 What’s most impressive about David Anspaugh film is how it avoids forced sentiment, the Achilles Heel of sports-related filmmaking. Norman Dale (Gene Hackman), a man of many faults, is hired to coach a rural Indiana’s Hickory High School team in the 1950s. When he realizes the team’s self-esteem is more woeful than his own, something clicks. If he can remake the team, why not himself? With a reformed drunk called “Shooter” at his side (Dennis Hopper), he instills patience and preaches hope. The rest is a fairy tale about exceeding expectations.

Hackman’s once-in-a-generation gift is to project transformation without showing off. His head and heart come around (he falls for a teacher, played quietly by Barbara Hershey). Is this a sports movie? Yes, of course; the idea of second chances and beating the odds is fundamental. But it’s also about moral rehabilitation based on teamwork and loyalty, linchpins of old-school Americana. Rated by ESPN as the greatest sports movie of all time.