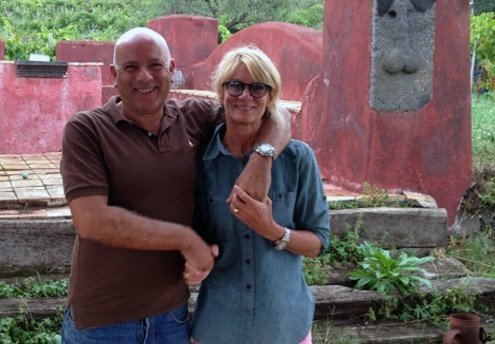 Cirò Biondi and his British born wife Stefanie. Photos by Eleanor Shannon.
I

n the late 1980s and early 1990s, a determined group of people including Salvo Foti, Giuseppe Benanti and Cirò Biondi decided to try to make world-class wine on the slopes of Sicily’s Mount Etna volcano. At the time, they were called crazy. Now they’re often labeled geniuses. I recently visited all three to pick up on their work.

Winegrower Salvo Foti is a man on a mission. He’s also generous, enthusiastic and a walking encyclopedia about the history of winemaking on the 11,000-foot active volcano. About a decade ago, Foti founded I Vigneri, an association of vineyards that sought to uphold the traditions of the 15th-century Maestranza dei Vigneri, a rigorous Catania winemakers’ guild.

Behind I Vigneri was an idea to amass growers eager to apply old school winemaking values. The watchwords were harmony and respect for the local environment, particularly since winegrowing has changed dramatically over the centuries.

In ancient times, says Foti, Etna wines were manufactured on small family farms, each one equipped with a palmento, a stone house where grapes were stomped, the juices gravitationally directed into tanks below, and the tanks then cooled by breezes. After fermentation, the wine swirled further downward into large wooden barrels for aging. Finally, a giant screw press was applied to the vinaccia, the grapes and skins left after fermentation.

It was Foti came up with basic rules to help define “traditional” Etna winemaking, including using native grapes; growing on terraced vineyards with “dry” stone lava walls — no cement; applying the ancient Greek-inspired alberello system in which each vine grew independently; planting vines one meter apart in five-point formation, so-called “quinconce spacing” (articulated by Pythagoras, and used by the Roman army); and respecting Etna’s older vines — some between 100 and 200 years old. When an old vine finally withers, a new one is planted in its place. None are ever destroyed.

His philosophy was core-level naturalism. “Our wine does not depend on one man, therefore dying with him,” he said in a recent interview. “This is a wine that survives for all men, becoming part of the territory and our civilization.” Foti can make the boast because both local reds and whites have a long aging capacity. Their full promise has yet to been revealed.

Of Foti’s wines, my favorites were Foti “I Vigneri” Vinudilice Rosato IGT 2010 (€32-35) from the Vigna Bosco vineyard, which at 1,300 meters may be Europe’s highest vineyard. It’s an elegant, crisp rose that’s a mix of Alicante (Granache), Grecanico, Minella and other varieties from centuries-old vines that Foti vinifies together.

I also liked Foti “I Vigneri” Vinupetra Etna Rosso 2005 (€50+), made from 100-year-old vines from the north slope of the volcano (at 700 meters) with Nerello Mascalese, Nerello Cappuccio, Alicante and Francisi.

Until 2012, Foti made wine for Giuseppe Benanti. It was Benanti who in the 1980s bet a friend — improbably at the time — that he could make exceptional wine on Etna. Benanti’s aristocratic family acquired its land in the 17th-century but had more recently turned from agriculture to pharmaceuticals. Acting on the bet, Benanti invested energy, research and cash into making wine on the volcano.

The Benanti villa and its ancient vineyards are in Viagrande, on Etna’s southeast corner, though for reasons of exposure, altitude and soil some of the more important vineyards are elsewhere. Among my favorites are Benanti Pietramarina Etna Bianco Superiore DOC (pietra means “rock” and marina “of the sea”), 100 percent Carricante. This flagship wine was first produced in 1991 comes from the vineyard’s eastern slope, which abuts the sea from the town of Milo, 950 meters above. Only in Etna are mountain wines also sea wines.

I also like his Benanti Nerello Cappuccio IGT (€17-20), a more “feminine” red, and Benanti Rovitello Etna Rosso DOC (€20-22), made from Nerello Mascalese and Nerello Cappuccio in an 80-year-old alberello vineyard on the volcano’s north slope.

Catania architect Cirò Biondi and his British-born wife Stefanie began making wine in 1990s, renovating crumbling terraces and planting old vines on three family-owned alberello vineyards on volcano’s eastern slope. On advice from the omnipresent Foti, the wine was produced in the Biondi family’s 17th-century family cellar. It soon earned praise for its excellence and personality.

“We like to come up here and just be,” says vivacious Stefanie, and I can see why. The stillness of the terraces is magical. As we sat tasting their new wines, we talked about their older Outis (Nessuno) Etna Rosso DOC (€20-25) and Outis (Nessuno) Etna Bianco DOC (€19-23) — the last vintage was 2008 when they worked for the now-defunct Vini Biondi label. With their new Azienda going and Cirò no longer practicing architecture, they’re busy making Outis again for vintage years 2012 and 2013, making Etna’s wine future more promising than ever.