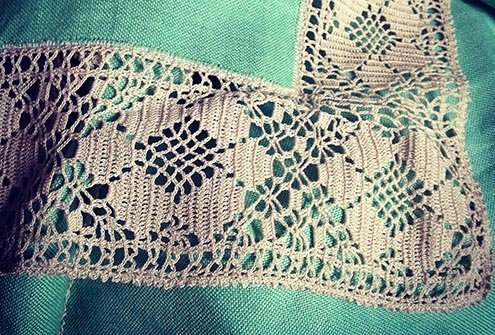 A world of lace my mother grew to know well.
M

illions women from all over the world recently marched in support of their rights, including the right to be treated with respect and dignity. Each of us has a woman in her life that set an example.

My mother Eufrasia was born in a small village near Messina in 1930s Sicily. I always though she could have been a character in Louisa May Alcott’s “Little Women.” In her imagined world, people loved each other, wore pretty clothes, and lived in houses laced with lace. She spent most of her free time (and she had little) making lace, rows and rows of sandy colored flowers she put together from the finest Egyptian cotton. She had a secret seamstress — we never met her — who stitched her creations onto beautiful linen doilies, tablecloths and sheets. Our dressers were full of them.

Life didn’t treat her so gently. Her health was often poor, but you would have never known it. She duly went to her work at Perugia’s main post office administration building every day. She proudly walked on high heels wearing a string of pearls and a silk blouse under a tailored suit. Her colleagues loved her.

In her youth, she’d thought her fate was to marry, become a housewife, and remain planted at home. But her father died young, leaving her mother alone with six children. Suddenly, her world turned upside down. Unable to find a job close to home, she had to leave the balmy shores of Sicily for the chilly winters of Umbria.

As a child I often asked her how she spent her time. She told me she’d go to work, go home to her rented room, and set to work making lace. It was her escape. Imagine her loneliness, a young woman in a strange town hundreds of miles away from her family and friends in provincial Italy of 1960. Imagine how people saw her, an unmarried woman over 30.

I don’t know the full details of that stage of her life. She wasn’t an eager storyteller. I do know she wanted to go back to Sicily. But then she met my father, they married, and she remained in Umbria for the rest of her life.

She continued working to support her Sicilian family, in part because she was proud of her independence. She worked until the last day before her retirement. She enjoyed most of it.

I like to think that a little revolution occurred in that rented room. I like to think that even though she was timid and traditional, uninterested in reading or in politics, she knew she could do something on her own terms. She realized she had power. Not a lot, but some.

I did not learn to be strong from her words, but from the example she set. She set goals. She didn’t drive a car but paid for my driver’s license as soon as I came of legal age. Later, she bought me a car so I could drive myself to my first job abroad. That was a huge effort, since her income was modest. She always believed I could fly.

She also told me I could use her famous lace tablecloths for important dinners, which I never did for lack of formality around our farmhouse table and a personal aversion to frills. This I regret.

I wish I had thought to make an “important” dinner for her, with plenty of lace, crystal goblets and all the dreamy things she liked. I would have put out a bouquet of roses; she liked those touches. It would have been a good way to say thank you. I miss you, mum.

— Blanch the broccoli florets in plenty of boiling water, then drain. Sauté one finely minced clove of garlic in 2 tablespoons of olive oil until fragrant. Add the florets and sauté briefly to infuse in the garlicky oil. Season to taste with salt and black or red pepper. Set aside.

— Make a fairly thin Béchamel sauce. Cook the pasta in plenty salted boiling water for l half of the instructed cooking time. Drain and toss the pasta with half of the Béchamel, 2/3 of the grated cheese and all the broccoli and sausage.

— Butter an ovenproof pan and make layers of the pasta mixture and the mild cheese, closing with a layer of pasta, a layer of Béchamel and a generous sprinkle of grated cheese.