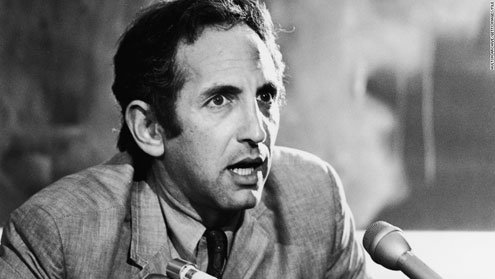 Daniel Ellsberg on trial in Los Angeles in 1973.
T

he behavior of conscience-driven whistleblowers can explain the way responsibility is perceived at any given time. Daniel Ellsberg and Edward Snowden are cases in point.

Ellsberg became convinced the U.S. government was systematically lying about a conflict that even secret government-sponsored research, including RAND’s, suggested it couldn’t possibly win, at least not in traditional terms. He began illegally sharing excerpts of RAND documents with government officials, including the staff of then-Senator Edward Kennedy, who opposed the war. He urged them to make the RAND research public, and accept jail time if necessary. No one agreed.

Frustrated, he pushed on, ultimately sharing the material with New York Times reporter Neil Sheehan, who in June 1971 — breaking a pledge with Ellsberg — published the first installment of lengthy excerpts of what would become known as the Pentagon Papers.

What followed was among the most intense free speech controversies in contemporary history, with the Richard Nixon White House using every available means to shut down further installments. It would fail. Nixon’s staff responded by smearing Ellsberg and creating an undercover team — the White House “plumbers” — intended to stop further leaks at all costs. Its activities ultimately led to the Watergate scandal and Nixon’s 1974 resignation.

Enter Edward Snowden, the former CIA and NSA analyst who recently leaked reams of secret information on American intelligence gathering efforts to the British press, which has produced a Pentagon Papers-style firestorm. Snowden, now 30 (Ellsberg was a decade older), took a less linear path to infamy. He started but didn’t finish his schooling; he enlisted but failed to complete his military training. He was, by all accounts, smart, web-trained, eventually hired by security contractor Booz Allen Hamilton, just as Ellsberg had been taken on by RAND, its think-tank counterpart.

But here the differences begin. Ellsberg, a trained economist, whose Harvard PhD dissertation covered “decision theory,” not only worked for RAND both in the late 1950s and late 1960s, but in the interim on the staff of then-Defense Secretary Robert McNamara. He also served as a civilian in Vietnam for two years, assessing conditions for the State Department.

Snowden worked for three months in an NSA facility in Hawaii. His Booz Allen short stint appeared to prove that U.S. intelligence agencies were systematically and secretly mining private data on a global scale, allegedly to pre-empt terrorist activities as part of the blurry, decade-old War on Terror. Snowden shared this information with Britain’s The Guardian newspaper, which broke the story in conjunction with the Washington Post.

Aside from the ethical considerations propelling the two men’s choices, how they behaved after their actions suggests a gradual shift in values systems and the moral worth of personal accountability.

Two weeks after The Times published the first installment of the Pentagon Papers, Ellsberg surrendered to the U.S. attorney’s office in Boston. This is how he explained his actions: “I felt that as an American citizen, as a responsible citizen, I could no longer cooperate in concealing this information from the American public. I did this clearly at my own jeopardy and I am prepared to answer to all the consequences of this decision.”

Ellsberg was charged with espionage, theft and conspiracy. His trial began in January 1973. But soon after, evidence emerged that the so-called “plumbers” were already at work sabotaging Ellsberg’s reputation through break-ins and illegal wiretaps. Those revelations would add fuel to the Watergate fire. Charges against him were dismissed in May. Nixon resigned in August 1974.

Snowden’s response was considerably more self-interested. After leaking the surveillance files, he flew from Hawaii to Hong Kong, seeking a country “with the cultural and legal framework to allow me to work without being immediately detained.” He wanted to move, he said, “before the public could have a chance to make their feelings known,” feelings he suggested would be manipulated by unnamed government agents. “I’m neither traitor nor hero. I’m an American,” he told the South China Morning Post in June.

At the same time, in something of a cultural irony, most whistle-blowing Americans do not seek asylum (with parking in Russia representing something of a double-irony, given its pre- and post-Cold War treatment of dissenters). On the contrary, those who leak state secrets tend to place potentially treasonous acts in a nationalist context, citing citizen rights and the greater good. Part of breaking the law, even for rebels, is to accept its naturally vengeful consequences, which Ellsberg did immediately. Surrendering to “illegitimate” legitimacy — the law of the land — helps gives risky dissent a sense of moral worth that loses credibility when the focus shifts to tracking down a fugitive.

That’s what happened in the Snowden’s case. The focus of the ongoing debate has less to do with what he revealed and why but on the complex dynamics of his flight. His generation’s resistance to personal accountability, abetted by the web’s disengagement from the idea of consequence, has cheapened his actions — particularly since many Americans still see their country through a Norman Rockwell-style prism, in which the legitimacy of any truth, particular when it involves betrayal, depends on a willingness to defend motives while facing consequences.

The very real debate over the limits of Internet spying, and public acquiescence to the War on Terror’s blanket mandate, which Snowden could have made relentlessly public in during a trial, upholding to the convictions of those who see security as a continuation of post-9/11 fear-mongering, is instead drifting toward a tiring summer reality show. A later trial, if it comes, will lack power.

All this because Snowden refused to accept that acting on the courage of one’s convictions means considerably more than violating oaths. It also means a willingness to explain, at personal risk, why the violation was necessary, if not fundamental. Otherwise the original choice is stripped of nobility.

The United States definitively pulled out of Vietnam in April 1975, pushed in no small measure by the documents Ellsberg — a more honorable thief — made public.