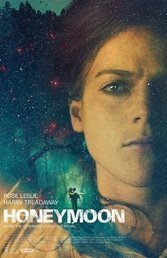 In an otherwise hackneyed honeymoon-turned-nightmare story, director Leigh Janiak pulls out two aces — her leads: Rose Leslie as Bea and Harry Treadaway as Will, Brooklyn-based newlyweds in the cabin of Bea’s youth, kissing, cooking, screwing, jesting, laughing and occasionally lapsing into vaguely menacing exchanges that hint at the backbone of what’s to come. “It’s scary out there,” says girlish Bea. “It’s scary in here,” replies skinny, goofy James. In fact, it’ll be both, the first presaging in the form of a giant bearskin, fruit of Bea’s father’s hunting prowess. Add troubling young neighbors, flickering lights, sleepwalking, mystery rashes, alarmingly improbable memory lapses (Bea’s), and the great outdoors is suddenly shot through with suspicion and primordial ooze. “You feel distant. You feel different,” says hubby, and he’s right, Bea’s white pallor included, which only ramps up Will’s own paranoia, which in turn ratchets up the spellbound mood of alien possession.

None of this would bear much scrutiny if Leslie (Scottish) and Treadaway (British) didn’t fit together so well, new husband almost overbearingly attuned to the newly bewitched moods of his increasingly estranged wife. There’s no fresh narrative territory here, and the last 20 minutes are almost ruinously silly, but credit Janiak for giving a familiar landscape a strange and engaging buzz, at least before the story heads for close encounters.