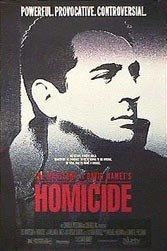 Mamet’s terse and grimly comic movie tracks a Chicago detective and hostage negotiator named Bob Gold (Joe Mantegna) who suddenly finds himself in a position to break a career case only to be absurdly sidetracked by the murder of an elderly Jewish woman who owns a candy store in the black ghetto. “It’s a candy store pop, just look busy on it,” advises his pugnacious partner Sully (William F. Macy), who pushes ahead with the major case. Resentful about his reassignment and adolescently scornful of rich Jews, Gold trivializes his new assignment. But after finding cryptic Tommy gun invoices and a 1946 photo of the dead woman toting one he’s slowly sucked in, his “lapsed” Jewishness and intimations of conspiracy exerting a gravitational force.

Rarely do musical swells get the better of language or pictures outstrip words. It’s a fine-tuned Mamet chess game that moves effortlessly from bluster, to loyalty, to duplicity, to the wages of self-loathing.