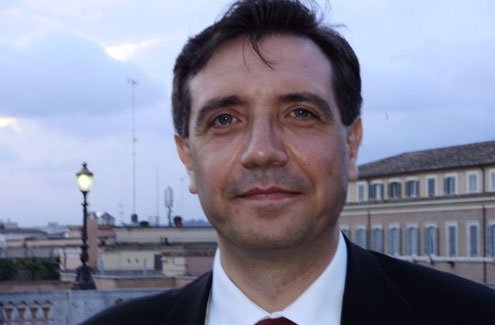 Brindisi-born lawyer Antonio Mumolo, 51, has spent a lifetime helping those in need.
L

awyer Antonio Mumolo enters the room wearing a tailored suit and an immaculately pressed button down shirt. He holds a briefcase while simultaneously tapping on an iPad. At 51, Mumolo supervises a network of more than 700 lawyers throughout Italy. Founded in Bologna thirteen years ago, his singular firm now has offices in 37 Italian cities, making it the country’s largest law firm. Its profit margins are just as unusual: zero. Mumolo is the architect of Avvocato di Strada (Street Lawyer), a volunteer organization that offers pro bono services to the homeless.

“In the past, Italy’s homeless people were poor but also mentally ill, with plenty of alcoholics and addicts in the mix,” says Mumolo. “They were usually pushed into the streets through a combination of poverty, addiction and illness. But the ongoing economic crisis has created an entirely different scenario. The new homeless are divorced fathers that can’t afford rent and child support and retired people who can’t get by on their small pension. Plus, with factories closing and companies under, we’re seeing a lot of blue collar workers who’ve lost their jobs at 50 as well as entrepreneurs who’ve paid off their debts but have nothing left.”

As part of the euro crisis, Italy slipped into recession in 2009, and remains in its clutches. The country’s official unemployment rate, which reached 12.5 percent late last fall, was the highest recorded since 1977, when the index was first measured regularly. As youth unemployment topped 40 percent, then-Prime Minister Enrico Letta warned of a “lost generation.”

Many members of Italy’s new working poor can’t pay their mortgage or their rent and have run through the circle of friends where they might spend the night. Some have seen their cars – their last shelter — repossessed by insurance companies. These are people who, in American Depression style, have lost everything, including their legal residency status.

“When you lose your legal residency, by Italian law you lose pretty much everything,” says Mumolo. “Having a residence is a prerequisite for health care, voting rights, and even receiving the pension benefits you’ve paid taxes to get all your life. If you don’t have a legal residence you can’t have a legal ID and without one you can’t apply for a job. Residency in Italy is equivalent to a social security number in the United States. Without it you stop existing. And once you’re on the street, it’s impossible to get off it.”

Those stripped of residency, the “working class” homeless who got that way after losing their jobs, are estimated to number between 35,000 and 48,000 people. Many face a Catch 22-like nightmare that not even irony covers. “When you’re stripped of residency you need to petition the state, and if your claim is rejected you need a lawyer,” explains Mumolo. “But the right to free counsel in civil and administrative lawsuits, including those involving residency issues, is guaranteed only to those who, 1. Can demonstrate they make less than €10,000, and 2. Can also prove they that have residency.”

The absurd loophole is a legal paradox the Italian system attempts to resolve by allowing cities to create fictional streets — Nameless Street or Homeless Street are actual examples. The homeless can fall back on these fiction addresses to circumvent the letter of the law and begin winning back their rights.

That’s where Mumolo and his team of volunteer lawyers come in, interceding on behalf of the outcasts. Mumolo was awarded the European Union’s European Citizen of the Year prize in 2013. In his office is a group photo of his lawyers, men and women, all smiles as they boarded a bus for the trip Brussels to receive the award. They look like school kids on a field trip.

These lawyers have fought and won hundreds of suits on behalf of the new homeless in recent years, most involving residency, but some also involving divorce, minor criminal offenses, and a slew of labor and layoff cases. “It’s not unusual for homeless people to find the occasional odd job, say, unloading fruit at the market at night, only to be turned away without pay because the people who offered them the work consider them helpless,” says Mumolo.

A combative look enters Mumolo’s piercing blue eyes. “So, we find a witness, we sue and we win.”

Mumolo is a labor lawyer by training and known as a tough legal adversary. Born in the Puglia city of Brindisi, he moved to Bologna to attend university and never left the city. His interest in social work began early. In 1993, he founded the nonprofit group “Piazza Grande,” which helped street people find a way back into mainstream society by teaching them basic work skills. These days, he devotes half his workweek to Avvocato di Strada and the other half to his for-profit law practice and his role as a labor lawyer for the CGIL union, the country’s largest.

Though Mumolo is married with two children, with a hectic schedule, there’s one annual date he won’t miss — his dinner with a man named Francesco. “I met him about eight years ago when he was living in a homeless shelter,” says Mumolo. “Francesco had worked for decades in a contact lens factory in what was then Czechoslovakia, but he’d returned to Italy for health care after he got sick. After a long illness, he lost his job, his wife divorced him, and he became an alcoholic. He also lost his house. We fought his residency case, and we won it for him. One day, just after that, he showed up at our office with a scanner-printer he’d bought for us. For three months he’d saved every penny of the €80 a month he was making teaching computer classes in the homeless shelter. The gift was his way of thanking us. Getting back residency meant he could finally get access his pension, to public housing; he could marry again. Basically, he got his life back.”