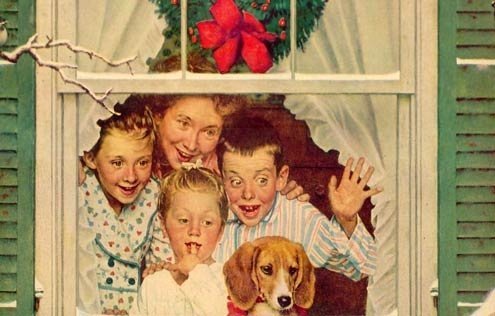 The nostalgic anxiety to see home and family never goes away entirely.
E

ver since I’ve lived abroad, distance has been my excuse for skipping a trip home during that most family-oriented of all holidays. It’s not that I don’t like Christmas, but that I don’t like all the fuss that surrounds it. Over the years I’ve spent some Christmases with friends, mixing up mimosas or Bloody Marys, bright but not early, then spending the day happily cooking and feasting. More recently I’ve passed the holiday here in Italy with my husband’s family, a tiny, quiet crew compared to my ever expanding own. At home, my siblings and stepsiblings are busy having babies, the family is multiplying, and the presents under the tree are adding up to a heap.

But it’s not true that I’ve spent every Christmas away from my childhood home. I did travel home once. Unfortunately, I was greeted by the debacle that only families of divorce know well: my parents had somehow scheduled their separate Christmas dinners for the same Christmas Eve. Obviously the child living across the ocean shouldn’t be the one to organize which day should be spent with whom. Lesson learned. But all involved persevered. Patience led to a happy holiday.

Despite my un-Christmas-like spirit and general holiday-avoidance (until it’s on top of me), every holiday season stirs up the same feelings. I become filled with a kind of nostalgic anxiety to see my family, and I begin wishing that I didn’t live quite so far away. Christmas cards filled with baby pictures start arriving in my mailbox; Christmas trees are heaved up in Piazza Venezia and by the Coliseum; by evening Romans return home laden with packages. The large, encapsulating family, which is often the center of life in Rome, appears even more drastically missing from my own life’s equation.

I start searching for airline tickets, combing websites for the best deals. I usually end up going home in January or February, which happens to be the most miserable time of year if you happen to be from Michigan. By winter’s end, Michiganders look forward to spring with sun-deprived eyes. They’re sick of the elegant lace pattern of bare limbed trees and have adjusted to the grey slushy chill and dark of endless nights. These deep and dreary winter days are imprinted on my brain; they’re a very specific reminder of why I don’t live in Michigan anymore.

Such home-and-away contradictions play out delicately within me. On one side is the abominable cliché in which Bing Crosby is always crooning “I’ll Be Home for Christmas” and where chestnuts are always roasting over an open fire. On the other is very real sentiment, perhaps amplified by the consistent presence of the cliché, of what it means — holiday aside — to miss out on my family’s togetherness.

Lately it occurred to me that the decision I made a decade ago to forge out on my own, to leave behind home ground and see where I landed and what my life would become, has produced a number of unexpected and unpredictable repercussions, not all of them positive. If the feelings of nostalgia that now wash over me were of little concern a decade ago, when my self and its priorities came first, and they commanded that I discover new things, now that I’m slightly older and that same self no longer dominates I realize that my bold decision has also produced sadness — a sadness that grows stronger as the years go on (though I’ll never regret my original choice.)

So here I am in Rome, amid the flood of cards and the trees. It’s been a bitterly cold month for a city that doesn’t handle freezing temperatures well, and the cold wind has been blowing under my unsealed windows, chilling me to the bone. I suddenly find myself wanting to sit in front of an open fire on a rug sipping on spiked hot chocolate among familiar voices.

And it all begins again: I start my online search for airline tickets, aiming to get to Michigan for a couple weeks in late February. By then, the cold grey will have permanently settled above the mittened state. By then, the whole of Michigan will be looking forward to spring.

No, I won’t be home for Christmas, but that doesn’t matter so long as I know I’ll be home sometime soon.