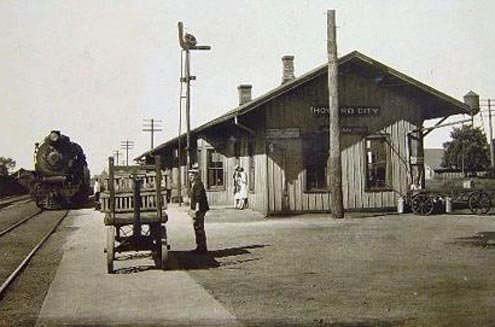 Train depot at Howard City, Michigan in 1922: Times change.
A

trip home for those who live far away from it involves considerably more than just flying someplace and being there. It’s not just about mingling with family and old friends, going out for dinner, or touring around town. It’s about a jumble of things, some deeply personal. Having made several such trips since moving abroad, and just having returned from one, it’s easy to begin to feel like an old pro.

But you can’t. Not really. There’s no such thing as being a pro at going home. The connections and expectations are too complex. I’m always struck by the happiness my family shows at seeing me, the wandering black sheep of the family.

Usually, as the days pick up speed, the pre-trip anxiety about family immersion wears off. Before I know it I’m getting ready to return Rome, and eagerly. On the one hand, the duration and tone of a trip makes returning to my adopted home seem comfortable; on the other, each trip proves how much my real home has changed.

This time was no different. Snow spotted the black air outside when I touched down at Grand Rapids Airport. I was slumped over and bleary-eyed after a nearly 24-hour journey. Driving home with my dad to the town where I was raised, a wintry movie seemed to play outside the windshield, one I’d seen so many times before. The next morning, the expanse of the fields was silent and blanketed white. I remembered how rarely the sun visits that mitten-shaped bit of the world.

Some background: I spent my first 18 years on my family’s farm in Howard City, Michigan. Since I moved away a decade ago, a few things have changed. The blinking light at the busiest intersection is now a stoplight. There’s a good newish restaurant. A few more housing developments have gone up on once empty or forested land. At our farm, the old wooden barn is now covered in red plastic siding and the tie-stall barn has been made into free stall. But the Holsteins look the same and farm smells never change.

On my second morning, I rode north to Rosebush with my grandpa and brother to pick up a manure spreader. As he drove, my grandpa intermittently recited particularities of the land, the names of torn down establishments, and current owners of certain houses. He’s been Howard City since birth. The town and its environs are as much a part of him as he is a part of them. My own memories played tricks on me. Didn’t what’s her name live in that yellow house? Wasn’t this the wooded lane I parked long ago to make out with my first boyfriend?

As always, I spent equal time in Howard City and Grand Rapids, Michigan’s second-largest city, which is where my mom lives. Grand Rapids where anyone meant when they said a “trip to town.” In the decade since my mom has lived there, downtown Grand Rapids has shifted from Christian Reformed conservative to hip. Where there was once a single coffee shop there are now a dozen. The once-limited restaurant choices have expanded; there are microbreweries and a wine bar. (I try not to think about the sorry state of West Michigan’s bookstores.)

For years, my habitual caffè order yielded a large cup of watery espresso (or strongish coffee). I’d also come to expect giant-sized plates of over- or under-flavored frozen food.

That’s changed. At Reserve, I ate a tasty dish of mussels. At Grove, I got delicious lamb in cream sauce. Leo’s served a heavenly bowel of lobster bisque, while Stella’s Lounge and the Grand Rapid’s Brewing Company did burgers proud, as always.

But what made a few lunches even better was the espresso at Rowster.

Family also grows. This time I found a new toddler niece and a newborn nephew. Even stranger than seeing these cute babies was seeing my siblings as parents and my parents as grandparents. When home comes in small doses, perceived changed can seem startlingly large. Or maybe I am becoming an old pro, now enjoying it more and more open to it all.

When I left Grand Rapids Airport, lake-effect snow wisped through the air. It had been two weeks in a flash. As I mentioned, in the past I often felt relief when the plane’s wheels lifted off, relieving me from the burden of family pressures.

But this time it was different. I felt calm happiness and an eager expectation. I looked forward to picking up the story again. A story whose only setting can be mine, and Michigan’s.