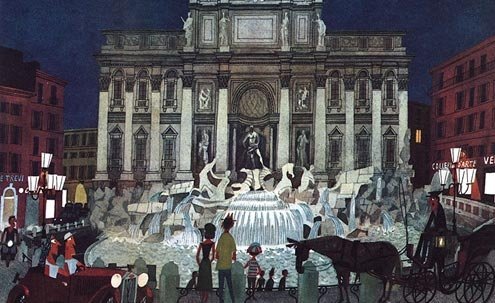 This Is Rome, Miroslav Sasek's 1960 children's book, shows much the same city as now.
O

ne of the boons of a trip, even a short one, is returning from the trip to see where you live in another light. Last weekend we went to London, and if there’s one city to compare others by, London should be it. Razed by the Great Fire of 1666 and bombed plentifully during the wars, it is older than most American cities and newer than most European ones.

There’s no standard in London. That at least was my first impression. Countless languages emerge in passing to supplement English. On Oxford Street roam true eccentricities, not just off-kilter leanings. People come and go and dress and do as they wish and will. Fashion lacks boundaries (English women must have iron legs to wear high heels without stockings in such blasted cold weather). Like other big cities, or so I imagine, a kind of electricity buzzes, borne up by so many people from so many places doing so many different things.

Being from a small town in Michigan and a solitary soul by nature, I once found such immensity overwhelming. Walking through a city like London could be more mysterious and at times intimidating than walking through a forest at night (and some city people would find the silence of a forest unsettling). Starting about a decade ago, my standard city size became Rome — which is a city, yes, but compared to London, just barely (greater Rome’s population of 2.8 million hasn’t grown much in recent years, while the London metropolitan area stands at about eight million, up by a million since 2001).

Rome is both the largest city I’ve ever lived in, and the one in which I’ve lived the longest. Its urban side has never challenged me, though I’ve learned to acquiesce to some of its cultural demands. In a way, Rome is a perfect place for someone from the country to learn about living in a city. That may have a lot to do with what both my Rome and London friends call Rome’s provincialism. Buildings in the center rarely rise more than six stories, sidewalks are the favored hosts of transportation, trees grow near my window, and the corner market sells veggies fresh from Velletri.

By provincialism, I think my friends mean the absence of a certain degree of diversity. Fashion here comes in waves and without much variance: one year it’s red pants, this year it’s short metal-studded boots. As for restaurants, most have consistently served the same fare — carbonara, amatriciana, cacio e pepe — for more than a century.

Rome is a living museum that showcases its historical eras. I recently bought “This Is Rome,” Miroslav Sasek’s famous 1960 children’s picture book, as a gift for my nephew. Flip through it and you see a city that’s delightfully static. But look at Sasek’s “This Is London” and you’ll see its pages littered with asterisks indicating that certain drawings and captions are no longer reflect what exists today.

London’s central cityscape is shiny and new. The Shard scrapes the sky, the gigantic London Eye Ferris wheel turns slowly by the Thames, and the Millennium Bridge suspends you above chilly river water. Each of these structures is sleek and eye-catching, with simplicity people associate with the super modern. Centuries collide and overlap. Near houses allegedly stalked by Jack the Ripper is a shopping center made from shipping crates.

But corralled into switching Tube lines, I was hit by something else: intimations of claustrophobia. The crowds were too dense, the tunnels too narrow, the rush hour too intense. This was not my adopted Rome. Could I commute in such circumstances daily? No. True, the intersection of Rome’s two busiest metro lines, at Termini Station, is exceedingly busy. Yet that’s the hive, the place of commuting frenzy, and can be easily avoided.

Rome has come a long way since its days as the cosmopolitan center of an empire. I imagine the old Romans as more like modern Londoners, tearing down the old and outdated, rebuilding temples and villas to suit the latest fashion (which once changed more slowly). Since then, Rome has endured periods of major revamping, mostly recently in the 1920s and 1930s when Benito Mussolini transformed vast patches of the medieval city and suburbs to fit an architectural plan and ideology that mimicked Augustus.

The extent to which Rome is irrevocably bound to its history isn’t surprising. At the same time, it has also opened itself to more modernist architecture that’s anything but provincial. There’s the salaciously curved MAXXI museum near the Flaminio; the two new bridges (Ponte della Musica and Ponte Ostiense); and Richard Meier’s white boxy case over the Ara Pacis.

Though Rome’s overt modernity isn’t as obvious as London’s, it’s exists — and it’s more than enough for someone who has no desire to ever ride the Tube daily.