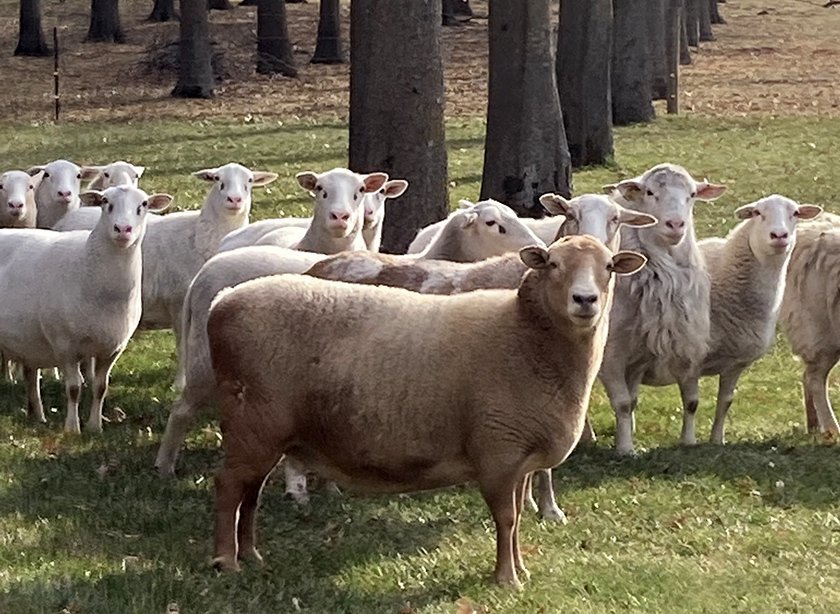 The neighborly sheep at the author's childhood home in Iowa.
A

few mornings ago, just before I awoke from a dream, I told myself this: No one wants to move back, not even me. But there will always be some small part of me that wants to move back — even if “back” doesn’t exist anymore.

It was an odd dream — an adult field trip to Italy, but everyone in the dream was from my childhood. So I’m not sure if what I told myself referred to moving back to Italy, where I lived for years, or to Iowa, where I grew up. Or both. Sometimes Iowa and Italy, my two former homes — the places I’ve lived the longest (although my new home of Florida is catching up) — overlap in my mind. As does my occasional desire to move back to both places. Even though Rome and Iowa City are profoundly different from each other, and returning to live in either would pose real practical challenges, and potentially emotional ones as well. Never mind the literary truism that you can never really “go home.”

Yet I feel at home in both places, deeply rooted and free at the same time. Perhaps this is the actual meaning of “home,” at least in an existential sense. No matter where you physically reside, home is the place where you feel safe, and because of that, ready to explore the world, externally or internally. To write and to think are, after all, at the very least, explorations of the self and its various truths.

No matter where you physically reside, home is the place where you feel safe, and because of that, ready to explore the world.

The name of the Montessori preschool in Iowa that my daughter attended this fall — Roots and Wings — captures this idea. And her teacher, Miss B., likewise had a firm but encouraging hand. She also had her Montessori teaching certificate framed on the wall, along with a 1,000 Lira bill from pre-euro days. “I remember the Lira!” I exclaimed the first time I walked in. Indeed, I’d been living in Italy for a couple years before Italy adopted the European currency nearly two decades ago.

Miss B. crooned about the Montessori method focused on child-led learning, and its founder Maria Montessori, an Italian doctor and teacher whose methods continue to travel the world.

If my daughter Julia got a touch of Italy through her Montessori education, Italy visited me as well during our four-month sojourn in Iowa.

In mid-November, a retired Iowa City friend who spends half the year in the Umbrian hamlet of Spello nudged me to enter a poetry contest there. A few weeks later, I got an email from the contest — the Giuseppe Carpanacci National and International Poetry and Prose Competition — that I’d received third primo, which I guess means third place in the English section. I’ll get a pergamena, or “parchment scroll.”

I was in my teaching nonfiction writing class at the time I found out, and I quietly gasped. “What is it?” My friends asked. “Oh, I got a little poetry recognition,” I said, adding carefully, “I’m a closet poet.” Iowa City is a town of poetry giants (several U.S. poet laureates were schooled here). So admitting you write poems is both entirely normal and a humbling risk. Nonetheless, I was thrilled. I’ve been plugging away at poems for years now, and coincidentally, my poem was about a certain kind of homecoming.

It also struck me as no small coincidence that my poem should be recognized in Italy. After all, Italy is where I began writing poems again as an adult. I didn’t consciously set out to write poems, but I started hearing language in a way that ended up in poetic form. My poems seemed to be more an act of listening, in fact, than of writing. Listening to Italian — the musical and liberating language I was surrounded by — which, until a few years ago, I dreamed in. And listening to myself, in my mother tongue, pulling me back home, wherever that may be.