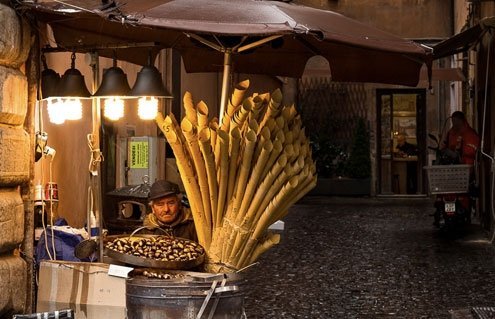 y first week back in the States, I felt like an Italian abroad. When I brushed past someone in a snowy West Village street, grazing their parka-clad sleeve, I blurted out “Oh, mi scusi.” When an Apple store employee told me the iPhone display was on the second floor, I started making my way to what Europeans would call the second, Americans the third. At a wine store on a snowy night, I stood in front of bottle racks trying to figure out which one might cut it as a tepid vino della casa before shelling out $20.

Crossing the road, I felt unfazed by oncoming cars — only to remember, in the nick of time, that here they’re not used to squealing to a halt for confident pedestrians.

But this time around the differences weren’t just niggling, endearing reminders of the country I’d made my home. They were reminders of what I’d left behind.

After more than four years of living in Rome, I’d decided to return to the United States, at least for now. The reasons were both personal and professional. From the moment I stepped off the plane I knew I’d made the right decision. But that didn’t make me any less a stranger in my own land.

It took weeks before I stopped saying buon appetito under my breath before meals. I had to stop friends mid-conversation to tell me what on earth “Duck Dynasty” was. I became adept at determining which seemingly nonsensical phrases were actually lines from recent movies or TV shows, and beyond my grasp.

Share too much of this with friends that haven’t lived abroad, however, and you run the risk of being “that” person, the obnoxious one. Nobody wants to hear a repatriated expat moan about how local tomatoes aren’t good enough for a fresh sauce (or even one happily talking about the little medieval town or agriturismo that used to be a favorite escape). It doesn’t matter how hard earned those experiences were, or that expats often give up everything from steady paychecks to nieces’ baptisms to a picket-fence yard to have them.

Shortly after I moved to New York City, a friend visited from Paris. She’d moved to France the same time I’d moved to Italy. Like me, she’d taken quickly to European life, with some of her friends assuming she’d never return. Unlike me, she’d set down roots in a way most travel writer don’t, with a career that required several work phones and included a gorgeous Parisian apartment (as well as a lovely French fiancée).

She needed to buy stockings, so we stopped at a pharmacy together. We wandered the aisles, looking for the right section, increasingly overwhelmed by the variety and the size of the store – and this just was a pharmacy! In a city!

“Why are Americans so obsessed with food?” she asked me. “Why is it everywhere? I mean, is it really necessary to sell food not only in restaurants and markets, but pharmacies?”

I wanted to hug her.

A few days later I published a blog post titled “50 Ways You Know That Rome Is Home,” a collection of tidbits I’d picked up on over my more than four years abroad:

• “You walk into oncoming traffic without blinking.”

• “You set aside whole afternoons for tasks you used to think of as simple, like mailing a package.”

• “You’ve realized you totally don’t need a microwave. Or clothes dryer. You can’t, however, live without a Moka pot.”

Within two weeks, it had been shared more than 50,000 times on Facebook alone. Messages started flooding in. At a friend’s birthday dinner, I sat beside a guy who’d lived in Switzerland. When he found out I’d moved from Rome, he immediately brought up a list someone had sent him about the ways you know that Rome is home — guess who’s list? I had to smile. Suddenly, I felt less alone. Thousands of people understood: Being abroad changes you. Not in 50 ways, but in thousands.

Yet the biggest change is one my list didn’t include. Most expats put immense energy into building a life abroad. Living in a new culture presents challenges few people ever even consider.

The process means more than just appreciating (and falling deeply in love with) your new home and goes far beyond assimilating some of the habits and quirks of your adopted culture.

Placed outside the culture that formed you, you’re suddenly freer to figure out who you are. What you want. And what you can achieve. You become aware of what you’re capable of.

Because once you’ve figured out how to walk into traffic, you can do anything at all.