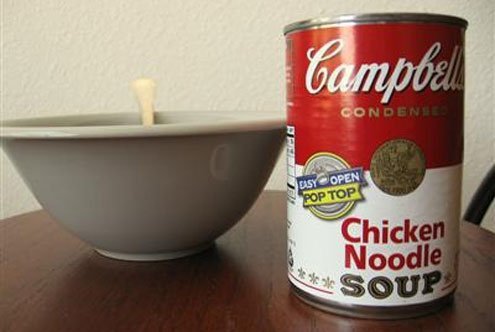 rowing up in a small coastal town near Rome, I’d tell my parents I thought I was coming down with the flu to avoid school. My grandfather wasn’t born yesterday but played along. He’d give me his good cook’s approving wink. “Okay,” he’d say, “today we’re making chicken soup.”

As in many cultures, Romans see chicken soup as restorative. A few days ago, my flu-stricken wife and I decided to Google “flu and chicken soup” just to see how much the folklore matched up to medical fact. Up popped a report published in “Chest,” the magazine of the American College of Chest Physicians, demonstrating the therapeutic advantages of chicken broth on the bronchial membranes. According to the report, chicken broth contains proteins that speed up the reinforcement of white blood cells membranes and other immune system defenses.

Postwar Italy contained few of the anti-cold and flu drugs that are commonplace at pharmacies today. Moreover, drugs themselves were still considered something of a novelty, largely for the wealthy or for foreigners. Fixing health problems often meant turning to homemade remedies. Folk wisdom overlapped into the kitchen, creating literal alchemy. Each family had its own remedial “recipes.” For example, my grandfather dropped pieces of ginger into his chicken soup — ginger at the time was available only at Rome’s Campo de Fiori market.

For colds, he’d boil up an aromatic concoction that contained a sprig of rosemary, spearmint, camphor, chamomile and bicarbonate. How would people react today if a well-known pharmaceutical company announced a curative balm that had to be melted in boiled water and then breathed in deeply? Probably with disbelief, or a sense that they weren’t getting their money’s worth. When one of us had a sore throat, my grandfather dissolved salt in a glass of water, added three tablespoons of white vinegar (which he made from his wine), and made us gargle the finished potion. He didn’t need to say a word. We knew.

If any of us got too much sun at the beach, he’d cook up potatoes in the oven, and use the skins to help soothe our sunburn. If we had a stomach ache, he would prepare what we called “grandpa’s magic potion” made of hot water, bay leaves, and lemon rind; half a glass and the stomach ache miraculously disappeared. Every morning he’d swallow a clove of garlic. Drugs helped, but they also hurt, he announced. For blood pressure, garlic was better than drugs. If he had a toothache, he’d chew on cloves and sip a glass of wine — sometimes one glass wasn’t enough. Cloves contain a compound known as eugenol, which acts as an anesthetic. As for the wine, he never offered a straightforward explanation, except that he liked it.

Some remedies shouldn’t be forgotten, instead handed down to subsequent generations.

Still, I found it a little strange when I made this recipe for my wife the first time. After all, the only chicken soup she’d ever known had come out from a can, Campbell’s. She didn’t think anything could be as good, particularly homemade.

On my end, I never dreamed that anyone could (or would) put chicken broth in a can. I can’t imagine my grandfather coming home, and, instead of cutting up a chicken, pry open a can of Campbell’s. If my grandfather hadn’t been such a smart cook and advisor I might not even be around to write this recipe. Who knows, I might not even have come to be in the first place.

Crepes in chicken broth (A variation on a Teramo dish known as “scrippelle mbusse,” which in Abruzzo dialect means crepes bathed in broth.) Serves 4.

For the chicken stock

For the complete recipe

This dish goes well with a fairly sweet wine, such as an Orvieto Classico or a Velletri DOC. My grandfather particularly liked Montefiascone Est! Est! Est!