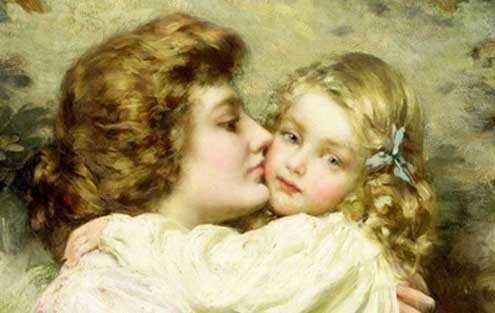 Though a mother's role is respected, it carries no vocationally weight. And kids suffer as a result.
I

came of age in the 1960s, a decade of major political and social transition. The feminist movement was a key ingredient in the torrent of change. I remember two schools of thought. One emphasized the value of women’s traditional contribution to life, which though different from that of men was of equal value. If home labor received workplace prestige (and compensation), maybe men might be more inclined to take on some of the same tasks. Many women who adhered to this way of thinking rediscovered forgotten “female” crafts, including knitting, embroidery, and bread-making. Others threw themselves into childrearing and homemaking in a hippy version of traditional roles. This sometimes carried over into communes that numbered many families.

Another school of thought suggested women should leave home and enter the workforce, holding the same jobs as men. The implication was that traditional men’s work was intrinsically valuable while that of women was not.

Traditionally, a woman’s role was to care for the physical and psychological needs of others, creating a pleasant home and good food while raising children. These essential tasks — which couldn’t be exactly quantified — were part of any woman’s job description for centuries.

It sounds strange to write that now, in the first quarter of the 21st century in a Western world that includes millions of professional women and single mothers. So does speculating on the society of the 1950s, which emphasized the value of the home. When I applied for jobs in the early 1970s the secretarial era was still in full swing. Never mind feminism, my application forms asked for my typing speed (the men’s version wanted a list of skills and qualifications). I’m proud to say I never learned to type — though I later learned secretaries in effect ran most companies while at the same time still being expected to get the boss’s coffee.

Over the decades I’ve worked with various institutions and companies. I constantly noticed that the employees who made things work occupied supporting roles. They were the ones praised for the “great job” they were doing, one that often included typing letters and running errands.

But the old “talk is cheap” saying is true. While workers in a supporting role may get verbal praise, they rarely get raises.

Likewise, movements that extol “family values” rarely promote any sort of reasonable remuneration for those most involved in ensuring a family’s wellbeing.

These days, family helpers at all levels rarely earn professional wages, let alone receive prestige pensions. The same holds for caregivers, whether early childhood educators, public school teachers, caretakers for the elderly, food preparers and cleaners. The professionals who do what most women did in the past represent an underclass of sorts. They’re as underpaid as workplace women, and have just as little prestige as mothers once did at home. Champions of family values are glad to encourage new mothers to return to work and leave their kids in the hands of caretakers.

While it’s true more men are now caring for their children, taking shifts at the stove or doing an equal share of household work, their efforts, in prestige terms, fall well short of anything they might do at an office. How many of these men would go into vocations such as child or elderly care? Not many.

The underlying dilemma isn’t that women or their surrogates are doing most of the care work, but that that work itself is still not valued despite its essential contribution to everyone’s psychological wellbeing, those of children in particular.

Many of my American students in Rome proudly tell me have family dinners once a week. For them, “once” means often. Yet I can’t blame men and women who often work overtime to support their families, while trying as best they can to provide a warm family environment.

In the 1960s it was still possible to support a family on one income, maybe because upscale salaries were taxed at 70 percent. Slaving for an exorbitant wage was hardly worth it. There was also more disposable income to pay employees.

What would it be like now, I wonder, if both partners could work part time? Maybe family dinners would become the daily norm and children could receive care from those who love them most.

Today, even burning candles at both ends isn’t enough. What suffers is our psychological wellbeing, and that of our kids.