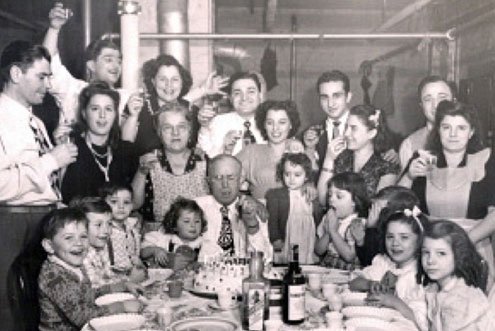 Not all members of a family are necessarily endowed with cooking genius.
C

ooking is a gift shared by many of the men and women in my ancestry. Whether I’ve met them or not, most of my relatives are in somehow associated with a dish in my family’s culinary repertoire.

I never met my maternal grandmother Clarice, but her legendary kitchen prowess endures. Her ragù sauce recipe written in lovely, romantic cursive (lightly spotted with olive oil) is framed in our family kitchen. I can picture her as my age, a newlywed, red lips pressed together, eyebrows furrowed in concentration, a lock of dark hair tucked behind her ears as she carefully chopped and stirred.

Her take on ricotta pie is rich and thick with dark chocolate chips and cherries. The recipe was lost for years until my mother began combing through drawers and cupboards. “C’mon mom, a little help!” The exasperation worked. From a top shelf came a tiny scrap of paper bearing the recipe.

Coincidence, say most, though I like to think it was her.

My grandfather was the rare Italian man that cooked, and did so with skill and exuberance. He was known to bring over oven-baked rigatoni and plates of chicken slowly cooked in white wine to ailing friends. It was nonno who planned and executed Thanksgiving dinner and who turned water and flour into delicate paper-thin lasagna noodles.

Christmas dinner on the other hand was my mother’s holiday, though the meal was all about impressing my grandfather’s palate: prosciutto and parmesan palmiers were symmetrically arranged on porcelain trays used once a year, the meat was methodically basted to perfection, and cake recipes perfected for months beforehand.

Now that he’s gone, I miss the ritual and spectacle of Christmas dinners past. My paternal grandmother is well into her 80s, but still cooks up glorious five-course meals, three courses if she’s feeding only herself and my grandfather. When I was little she taught me that meatballs and pasta were always eaten separately (despite what “Lady and the Tramp” told me), and that green beans, once dressed with good balsamic vinegar, were delicious.

At my grandmother’s house, both pecorino and Parmesan are habitually kept in delicate glass jars with matching spoons, each used depending on the recipe being served. Sei dimagrita, (you’ve lost weight) she tells my while piling more potato croquettes on my plate.

At home, I was just as spoiled. Growing up, my mother never bent to Chinese take-out or Stouffer’s frozen dinners — we ate veal cooked in red wine under a bed of rice, pasta tossed with sage and pancetta, and when we were sick, we ate pastina, or tiny star shaped pasta in chicken broth. Snow day food was gorgonzola mac ‘n’ cheese, Shepherd’s pie, roasted tomato soup.

I felt bad for the kids whose moms never learned to cook. My twin sister Francesca has been baking and cooking since she was 12, carrying forth our family tradition. In middle school, she learned to scrape vanilla bean seeds from their pods for homemade cake frosting and to make Gruyere tartlets. Before she graduated from high school, she knew 10 ways to cook eggplant, made her own piecrust, and special ordered pork shoulder from the butcher to make traditional Chinese pork buns. For my grandfather’s 75th birthday, she made a towering five layer German chocolate cake. “Do you bake with a Betty Crocker mix?” a colleague naively asked her once. My sister laughed softly, indulgently. “Oh, I don’t think I’ve ever used a mix.”

I’m not part of this culinary genius and I’m not quite sure why. Maybe my twin sister love of food made us different, and that mattered. Or maybe it’s because I never really had a chance in such a crowded kitchen with such an abundance of dishes and cooks.

It could also be, I admit it, because I’m plain lazy. I once made a pizza for a boyfriend that I didn’t realize was seared on the outside and still Pillsbury dough-y on the inside (another got a scrambled egg carbonara). Sometimes, I worry I’ll feed my kids Kraft mac ‘n’ cheese and microwaveable meals, and that I’ll brainwash their taste buds with salt and artificial flavors. What would my grandparents think? I wonder if I’m missing out on some rite of passage, or that I’m denying the generations after me of something sacred. Will I always be the one relegated to setting the table and polishing the silver? Will my skills stretch to only toast and butter?

With all this on my mind, I took Christmas to cook. I measured and mixed the corn bread ingredients and baked it until fluffy and golden. The squash was tossed in exactly one cup of olive oil like the recipe said, seasoned and set to roast. Cooking, I thought smugly, wasn’t so hard. But tasting the finished product revealed a different story — it seems I’d confused baking soda for baking powder and oversalted the squash. Neither, I admitted, were edible.

“Cooking is just hit or miss sometimes,” my sister consoled me as she lifted a perfect cherry and white chocolate bread pudding from the oven. In the end, I decided to buy a few nice cheeses as my contribution to the dinner, a crowd-pleasing appetizer. Some are meant to cook. Others, I’ve decided, are meant to be fed.