Home by the water’s edge 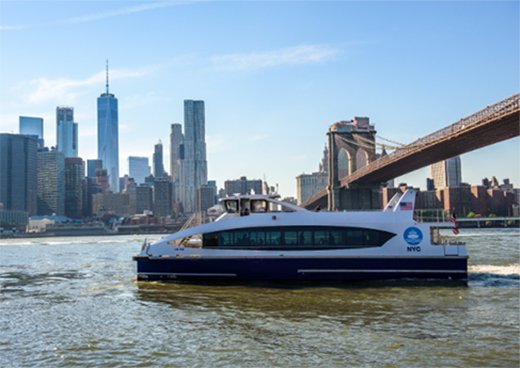 Before me, reflecting the light, stood a jumble of tall stacked towers…
N

ot long ago I had an epiphany. Although I’ve lived in New York City for nearly 20 years, I only recently came to know an obvious truth: I live by the sea.

Of course I’ve always known that the city is an East Coast port. But living here is mostly an experience in urban engineering.

We New Yorkers travel underground in train tunnels removed from daylight. We are illuminated by florescent bulbs and transported by subway cars that rumble and screech. When we come above ground, especially in Manhattan, we find ourselves in a canyon surrounded by towering skyscrapers that obscure our view of the sky and horizon. We walk on concrete pavements, our senses often assaulted by jackhammers and the whiny roaring of ambulances. Though the city brims with vitality, it is disconnected from its once-central world of water.

For $2.75 passengers can commute up and down the East River and transfer to more distant destinations in the Bronx or Long Island.

My sense of this changed suddenly with the addition of a ferry line whose sleek boats dock in my Brooklyn neighborhood.

Two blocks from me, in the Navy Shipyard, is a new stop on the city’s expanding ferry system. Different from the Staten Island ferry, which only travels to Battery Park, this high-speed fleet maneuvers to underserved parts of the city. For $2.75 passengers can commute up and down the East River and transfer to more distant destinations in the Bronx and Long Island. On the day it opened, I walked the two blocks to hop a ride on the maiden voyage.

In truth, the East River is more tidal strait than river, unlike the Hudson born from mountain streams in the state’s northlands. Its currents are regulated by the ebb and flow of the Atlantic Ocean between New York harbor and Long Island Sound, which then reaches further into the upper bay of New York. The city’s five boroughs are interlaced by a system of estuaries, rivers and bays.

Once at the Navy Shipyard, I negotiated my way through security checks, around warehouse buildings and parking lots, and followed signs that led me to the ferry dock.

An old navy vessel, the “Cape Ann,” rose up before me dressed in battleship grey, and I knew I must be close.

Then I saw the river and the NYC ferry dock. A breeze carried with it the unmistakable smell of salt and ocean. I boarded the shiny new ferry and climbed to the upper deck, inhaling the sea with each breath. We then pulled out of Wallabout Bay, past banks lined with old tires and rusted cranes. A lone sea gull sat on a pylon eyeing me as we passed.

New York harbor once feted liners by the dozens.

In minutes, the expanse of the city rose miraculously into view on the opposite bank. Before me, reflecting the light, stood a tall jumble of stacked towers made from concrete and steel. They appeared to rise from the water itself. The Manhattan Bridge stretched like a muscular blue steel arm reaching bank to bank. Soon after came the Gothic stone arches of the Brooklyn Bridge.

As the ferry churned beneath the bridges and glided by the cityscape, we entered New York Harbor. Here I became newly aware of the city as a major port, where before jet travel, giant liners once docked in rows. Now before me, a tugboat pulled a double barge and other vessels unloaded stacked containers at the Red Hook terminal.

As the ferry headed under the Verrazano Bridge the ocean swells grew larger. With no sea legs to help me, I kept tight hold of the railing.

Entering Jamaica Bay, we passed a scattering of tiny islands with nesting shorebirds. A cormorant dove down and pulled out a fish. The sky and horizon grew larger as if to make room for me in a place no longer made of city but water.

It’s been centuries since Giovanni da Verrazzano and Henry Hudson sailed into what would become New York harbor. Even longer since the Lenape Indians called this place home, living on fish and oysters.

Without the skyscrapers, subway tunnels, asphalt grid and concrete sidewalks, this place is defined by water. It is island and peninsula, bay and river, estuary and ocean.

And now, finally, I can say I live by the sea.