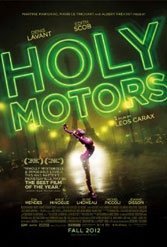 Occasionally, film-loving French directors make showstoppers that defy comparison. Jean-Jacques Beineix’s 1981 “Diva” was one, a surreal thriller that toyed with conventional narrative technique. Now it’s critic and filmmaker Leos Carax turn. His ambitious “Holy Motors” is best described as a surreal homage to acting and life itself as a self-replenishing stage.

It opens with a man — “Le Dormeur” (Carax) — waking from a sleep and wandering into a packed theater in which all are watching a movie. That movie, and Carax’s, then shifts to a billionaire businessman appropriately named Mr. Oscar (Dennis Lavant) who over the course of a Parisian day is tasked to play nine roles in separate scenes his assistant and driver Céline (Édith Scob) bills as “appointments.” From white stretch limousine that resembles a backstage room, Mr. Oscar emerges as a beggar, an assassin, a dying uncle, an illicit lover, a character in a musical, and a hunchback dwarf who gallivants through cemeteries in which gravestone epitaphs list websites. These breathless transformations, one more spectacular than the next, are beads in a time-warping, death-defying chain. Chameleonic Mr. Oscar does what he does, he says, “pour la beauté de gest,” for love of the deed. But who, he wonders, even watches these deeds? Is he an actor, a stuntman or just slave to the daily recycling of makeup and special effects? Carax asks these questions of both character and film, as if each had a mind of its own and were together conspiring to make sense of the cinematic dream in which they’re trapped.

Juxtaposition is lord and master: Mr. Oscar strides through a church playing in an accordion rock band; he transforms a fashion model (Eva Mendes) into a hijab-hidden maternal temptress who sings lullabies; he kills a man who to then disguise the dead man as himself. It’s a Job-like odyssey that tries to make existential sense of “Lights! Camera! Action!” Why Holy Motors? Because life’s “real” stage is on limousine loan to Pinocchio-like actors — God’s blue collar workers — whose scripts are revised daily to ensure that the staged fiction known as reality plays out convincingly.