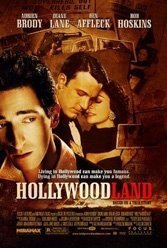 Allen Coulter’s movie about hard knocks in postwar Hollywood caroms around gamely but never really lights a fuse. In 1959, George Reeve (Ben Affleck), known for his portrayal of “Superman” in the popular early TV show, is found shot to death in his Los Angeles apartment. He’d been despondent and out of work. Police dismiss it as a suicide. Not hustling private eye Louis Simo (Adrien Brody), who’ll do anything for buck. He cons Reeves’ mother into a murder investigation potentially centering on Reeves’ fiancée Lenore Lemmon (Robin Tunney).

To make then-and-now work, Coulter cuts between wisecracking Simo’s ongoing case — Brody is engaging as always — and flashbacks to Reeves’ 15-minutes of “Superman” fame, a gig he loathed, hoping instead to climb into Clark Gable territory. His ticket, or so he thought, was a live-in affair with the older Toni Mannix (Diane Lane), the wife of MGM chief Eddie Mannix (Bob Hoskins, who shines). Affleck’s Reeves is a youthful and good-looking ingénue will only modest talent.

This is speculative history that relies on murder plot hints (did Eddie order the hit?) and its 1950s Hollywood trimmings — that and the sad if separate private lives of both detective and actor. Snappy it’s not. The double storyline, though chock with would-be femme fatales, dubious PR men and L.A. cynicism, interrupts any forward thrust. Nice try, stylish mood, no cigar.