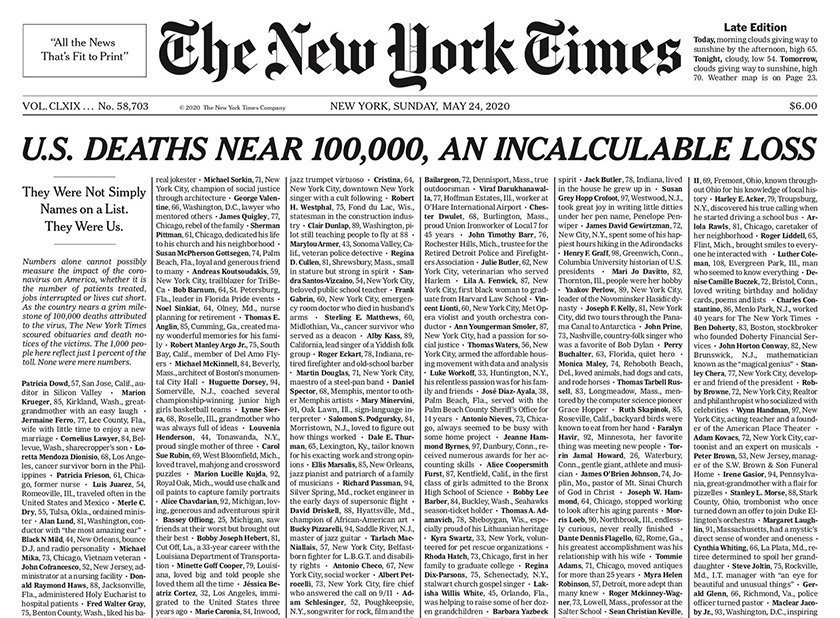 A clever disgrace by a high-minded newspaper.
I

will keep this mercifully short. On May 24, a Sunday, “The New York Times” pulled a cheap stunt. It filled its entire front page with the names of 1,000 of America’s nearly 100,000 coronavirus victims.

Ostensibly, the gesture was intended as a sincere homage to the dead. By chance it also admonished a president perceived by “The Times” as having abjectly mishandled the crisis.

Whatever its motives, it was sensationalism of the worst kind, which is to say manipulative.

Journalistic objectivity was created as a means to defend against the sentimentality generated by big events.

For a time, news gatherers of all kinds swore allegiance to detachment, or tried to, limiting their use of adjectives. “Horrible” and “abominable,” commonplace words for decades, were reined in to avoid making news into a caricature of Hollywood, rife as it was biased and way-of-life propaganda.

Newspapers printed no massive lists of the early 20th-century war dead, and made little effort to commemorate the Vietnam or Iraq war victims since both conflicts were perceived as embarrassing errors (a Vietnam memorial was later created as a guilty afterthought). Victims of disease were never lionized because diseases, like it or not, were assassins built into the human condition. To contract one and die was sad, but entirely unrelated to heroism.

This cool-headed ethos, already on the rocks, ended abruptly with the September 11, 2001 terrorist attacks. Suddenly, New York City was perceived as the dwelling place of heroes and martyrs , and that message was force-fed globally. “The Times” embraced this emotionalism with open arms. Outrage and solidarity were sold as merchandise. Firemen who’d died doing their jobs became fallen knights – a label some rejected, insisting duty should not be confused with heroism. These voices stood no chance against the patriotic mythology concocted around them.

Aspects of the same mythology have now been transferred to the COVIID-19 dead, to the rather notable exclusion of the millions who die annually of other decimating ailments.

Worship of the COVID dead is a cousin to the orthodoxy of dread and disaster that for two decades invested Islamic extremists with power enough to start a misguided war, one “The Times” at first supported. It did so because the detachment mentioned above came undone.

That is happening again, making way for Hollywood front pages.

The resistance to emotional and sentiment bias, in which social media revels, these days overflows its banks. As a result, so-called objective media wishes to become more like social media. Heroes and martyrs are generated instantly and marketed with immense ingenuity, behold the “Times” front page.

But strip away this attention-getting dross and the listing of the 1,000 COVID dead, part of what the paper’s headline called an “incalculable loss,” is no more than a gimmick, a paper app.

A hero may be someone who pushes a distracted walker out of the way of an oncoming car and is killed as result, or a soldier war who throws himself atop a grenade to take its full impact. It is, as medal preambles state, for acts above and beyond the call of duty.

Dying of disease (no matter how “unfair” the death) does not qualify, and those who use them as fodder are opportunists at best.

That an esteemed newspaper appropriates empathy to make a point about a president who appears to lack it is deplorable.

To the president’s ample list of mischief, “The Times” — whose detestation of that same president knows no limits — has added a menu item of its own, selling it instead as a national reflection of concerned solidarity driven only by sincere grief and moral rectitude only.

Nonsense on both counts. Contrivance is not compassion. A stunt by any name remains a stunt. And may God bless America.