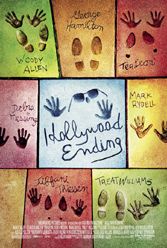 Over 40 years, Woody Allen has shambled all over the cinematic map — allegory, parody, self-parody, spoof, backhanded homage, front-and-center bumbling. Where he hasn’t gone much since his halcyon days is slapstick. The fun of this confection — and fun’s the word — is in Allen’s refusal to milk it for meaning. Instead, it milks itself.

Nutty Val Waxman (Allen) is a has-been director who gets a new project thanks to his cloying agent (one Al Hack). Before starting, Val panics and goes temporarily blind. Urged on by Agent Hack (oh, my), Val decides to go through with the movie project. There’s a Chinese cinematographer who speaks no English and a translator (Barney Cheng) who tends to favor the literal. Allen also gathers his usual assortment of pretty women (Téa Leoni is Val’s ex and Debra “Will and Grace” Messing a bimbo called Lori) and even hauls in Treat Williams to play Hal, Galaxie Studio’s busybody CEO. But they’re all window dressing. Think about it: Waxman and His Man Hack (Mark Rydell) trying to make a movie the director can’t see. Allen in wonderland. Analyze that.