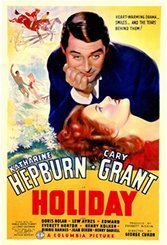 Johnny Case (Cary Grant) is a witty guy out of Baltimore who never takes himself too seriously and has no problem telling people his father was a grocer. Sure, he went to Harvard and has managed to do well in the dog-eat-dog into Manhattan business scene, but at heart he’s a chipper eccentric with academic friends who couldn’t care less for the trappings and affections of New York mansion life. He and his best buddies — academics Nick Porter and his wife Susan — think there’s more to life than toting up greenbacks and dropping names. Johnny even has a secret plan to go AWOL from 9-to-5 toil so he can take in the world around him before he’s too old to enjoy it. When in doubt, Johnny does backflips to get things straight again.

And he’ll need plenty after meeting Julia Seton (Doris Nolan), a bank scion’s daughter he decides is the love ion his life. Until, that is, he’s sucked into her family orbit of pretentious moneymen whose loyalty is to cash and its offspring of copious entitlement.

George Cukor’s 1938 delight hasn’t aged a penny, instead acquiring fresh relevance as Wall Street capitalism dug in for the long haul. If you ever wonder where Oliver Stone’s warped Gordon Gecko was born, look no further than “Holiday.”

As Johnny tries to win approval from Julia’s father, who doubts his future son-in-law’s devotion to wealth and status, Julia’s thrill-starved older sister Linda (Katherine Hepburn) and brother Ned (Lew Ayres) make it clear life in the monies mansion is anything but fun. Ned’s a good-natured drunk; Linda a vivacious loose cannon who lives like a caged bird seeking a way out of tycoon “heaven” and dreams of the road less traveled from her refuge, the “playroom,” in a mansion that goes on forever.

If only the man who represents that road weren’t Julia’s own Johnny. Suddenly, the two sisters are vying for one man, opening a rift that exposes the foibles and hypocrisies of 1930s club-and-cigar elitism (no love for “socialist” FDR and lots, between the lines, for the rigor of European fascism).

Cukor keeps the tone light thanks to Grant’s repartee with Hepburn, who spins charm her brittle little sister can’t match.

It’s Hepburn’s show to steal, and she obliges thanks to wordplay from heaven. “You see Case, the trouble with me is that I never could decide whether I wanted to be Joan of Arc, Florence Nightingale, or John L. Lewis.” But she has decided she’s falling in love, hard.

Cukor’s most essential figure may be son Ned, who reluctantly capitulated to his father’s version of the “American man,” and finds sanity in drink only. (“Drink to Mother, Johnny, she tried to be a Seton for a while, then gave up and died.”) Before long, Johnny, Ned, Linda and the Potters band together into something of anti-establishment club,

In the end, Johnny will see the romantic light, the true holiday on his doorstep, but not before 90 minutes of nimble carousing that also plunges a no-nonsense dagger into a banking and trading world that has yet to find any moral high ground even a century later.