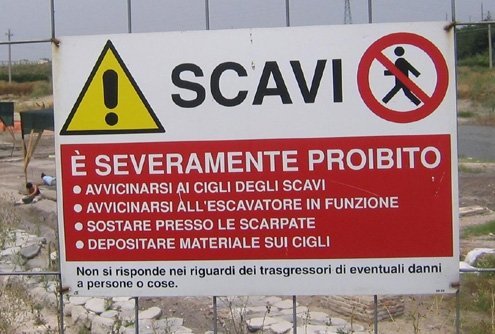 ome honors holes. They’re on streets, along sidewalks. They have their own hierarchy. Veined façades compete with gaps in marble. Chipped-tooth pavement quarrels with blue collar asphalt. It’s a feast of downbeat solids.

On the eve of my mother’s funeral in 1988 I drank too much wine and a hole got wise. It snapped my ankle like a dry branch. It’s still there.

Italians have a primordial relationship to holes. Making love is a form of burrowing. Gesticulation is like digging. Visiting dark cavities is proof of life.

Something else: Beneath modern Rome lies acres of its predecessor. Six feet beneath temples are more temples. As a brown-eyed boy with milky eyes I called into holes hoping to wake Roman gladiators. I put my ear to deep openings. Ants scattered.

City planners rationalize the fits and starts of the city’s subway system in terms of ruins, which are no more than official holes. My neighborhood’s latest hole is already a celebrity. People line up to examine it. Motorists curse it. “Quel cazzo di bucco,” a driver of a Mercedes barked the other day, bunching up his fingers. “That cock of a hole.”

Inside the cock of a hole is a diligent woman archeologist with long dark hair. Rome diligence is relative. She usually works from 10 a.m. to 3:30 p.m. Sometimes she’s accompanied by two white-frocked assistants in dirty white coats who look like medical orderlies. They watch her or chat on their cellular phones.

Like most Rome holes, the one in my neighborhood is the product of lavori, or public works. Wiring, water mains or gas pipes — they’re all fair game for underground rescue missions. In September and October (not August, when the city is empty and malleable), my neighborhood decided to gussy up its traffic lights, which for years teased one traffic flow at the expense of another. “Quel cazzo di semaforo,” said drivers about the worst of the lights. “That cock of a light.”

When schools reopened in mid-September, at the peak of the city’s pre-winter hubbub, construction crews began sawing into the meat of local streets. Squeezed traffic came to a halt. Slowly, though, the crews began stitching up the wounds.

On the shoulder of a vital artery near a crucial intersection (and “that cock of a light”), a rather large hole revealed remains of a tomb. Curious workers then found a second tomb. Roman, said some. Etruscan, said others. My neighborhood, well outside the ancient city, is said to sit atop burial grounds. In spring laughing gulls stake their claim to local rooftops, their sunset ululations sounding like cawing mourners making up for lost time.

As soon as word of the tomb spread, the city’s antiquities board, a slow and vigilant body that acts with the deliberateness of death, halted all work. After much conferring, the woman archeologist arrived and set up camp.

That was nine weeks ago. Meanwhile, the hole gets neither bigger nor smaller. Of the four cranes that flanked it three are gone. The archeologist visits the hole as if tending to a patient with only moderately interesting symptoms. Every afternoon at rush hour traffic piles up around its edges. When it backs up 10 blocks motorists lean on their horns, which is illegal. They do this five days a week for about two hours.

Today I finally took time to approach the hole. It was mid-afternoon on a resplendent November day and cars squirted around it, carefree. A mother and a daughter, both with ice cream cones, leaned against the dig’s outer railing. The mother seemed taken by its mystery.

“The city was once in the hole, la vecchia cittá,” said her mother, but the little girl seemed bored and restless. A tiny jaded Roman, she tugged on her mother to leave.

“It’s just a hole,” she repeated. She then tossed her ice cream cone into history and walked away.