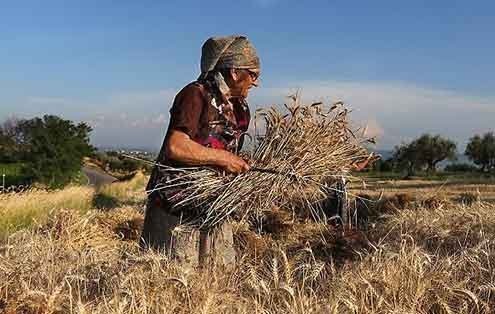 Now, rural Italian farmers return to heated homes with running water. But a century ago things were very, very different.
I

’ll tell you a secret: my grandmother was a terrible cook. I know, I know: all of you are convinced that Italian nonnas by definition are wizards at the stove and that they spend all their time in a sunny kitchen stirring huge pots of meat sauce while baking cookies for the kids.

But the reality, particularly on the rural side, is that most of Italy’s culinary history was shaped by survival and not sentimental tales of bucolic kitchens.

A farmer born in Umbria at the start of the 20th-century, my grandmother wasn’t expected to be a great cook. She was expected to survive countless hours of hard work in the fields, tending animals to help root out the produce later sold at market in Perugia. Ownership was rare. The marginal income from market sales was used to pay landlords who charged for housing and tilling the land. Meals were a simple affair of bread, beans and vegetables. Meat was a treat reserved for holidays.

A slice of bread covered in sugar mixed with a teaspoon of red wine was one of the two desserts my grandmother knew how to make. The other one was a ring cake so dry you could use it as a doorstop.

Surprisingly, she had no sad memories of this tough life, except about my grandfather who hid in France during World War II to escape deportation. She was left alone with a child and the prospect of more hard work. They had a pig, a rare privilege during the German occupation. She liked to recount how they failed to properly kill it in secret to avoid its confiscation. Instead, the terrified beast began howling and running, giving them the scare of their lives. A pig can save your life or the opposite. They went undetected.

She was lucky in a way, since after grandfather returned from France they had no more children. When they moved to the city, their apartment was the first place they’d ever lived in with proper heating and a bathroom. By then they must have been in their mid-50s. They found simple jobs and forged a life in which special food was never an item, except perhaps cheese bread for Easter and ravioli for Christmas.

And you know what? I didn’t think less of my grandmother because she couldn’t cook. I had enough wonderful cooks in the family and never faced a single day of true hardship.

Somewhat along the line I realized that my grandparents had passed through a dark age and landed on the other side, in a time of plenty they didn’t know how to take advantage of.

Without the pink paint of nostalgia, the life of farmers is best represented by resilience and courage. Whenever you choose to romanticize it, think again.

I like to cook beans from scratch, which is cheaper. The flavors are also purer and you’re not dealing with added chemicals. You can cook a large batch of beans and freeze them in portions with their broth for a ready meal. This recipe requires about 1/2 kg. (1 lbs.) cooked beans.

— Soak the beans overnight in water at room temperature. Rinse and transfer them into a tall saucepan. Add onion, carrot, tomato, celery and cover again with plenty of water. Cover and simmer slowly until beans are tender, 1 to 2 hours.

— Roast the sausages in a pan with ½-inch of water and a tablespoon olive oil until lightly brown on all sides. Remove them from the pan, cut them in half, and transfer them back into the pan to keep them warm.

— When ready to serve, chop rosemary very finely, almost to a powder. Do not do this in advance, as the rosemary will loose its flavor. In one or two tablespoons of olive oil sauté the rosemary with garlic until it’s fragrant.

— Add the beans, season with salt and pepper, and stir to incorporate until heated through.

— If you’re using them, add the steamed vegetables and transfer the beans in the pan with sausages to soak in the meat juices. Serve immediately.

Always remember both princes and paupers have to eat, and the world is filled with more of the latter.