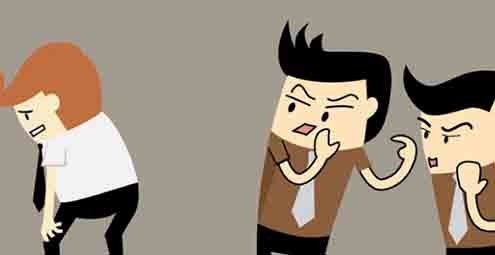 Snubbing and snobbery are the most common forms of "passive" hostility faced by LGBT people.
I

’m a white male and as such belong to a privileged minority. That doesn’t mean I’m blind or insensitive to the discrimination directed daily at those without similar privilege. Being gay has ensured that I too will experience being treated as subhuman because some bigot feels he has the right to make a point.

But the old saying about bullies being cowards is true. Bullies will rarely confront you directly. Their discrimination comes in the form of snubs or snobbery. There’s rarely a smoking gun. Instead, you’re left feeling dirty.

Italian bureaucracy and its incredibly convoluted legal system are infamous. As a result, people rely on notaries to deposit and register legal documents including wills and directives. Even though my partner Alberto and I are now in a legal civil union, we needed a notary to resolve some ambiguous questions regarding our inheritance and financial liability. We also wanted to deposit a copy of our last will and testament. The document not only spelled out how we wished to handle inheritance but also stipulated power of attorney and medical decision-making rights.

It’s a fairly straightforward process all over the world, right? But when Alberto phoned the notary for an appointment, the secretary said needed to check his availability. She’d call back. Weeks passed without a call.

Months later, Alberto called the notary again, this time regarding a matter of separating our common liability following the registration of our same sex union. The secretary informed him the office was very busy. She suggested we use the services of another notary.

Our new notary is a very professional woman who speaks clearly and directly about our situation and how we can get maximum legal protection. When I ask her a direct question about inheritance, she looks back at me and answers just as directly. I feel like a real person.

But my story doesn’t end with the notary. For the past three years, Alberto and I have made it a habit to go to our neighborhood pizzeria almost every Friday evening. They make a good pizza and have a heated outdoor patio where we always sit. Like many Italian pizzerias, it’s Chinese owned and operated. By now, many of the servers know us and we sometimes chat with them. Though the owner is very friendly to many of his other customers he’s always been rather cold with us. Never mind.

One day, we came in after rush hour, as usual, and saw the owner standing by the patio door. The patio was almost empty. He suggested we sit at the small table behind the door. I told him we preferred our usual table away from the cold draft.

“Why does he always try to sit us at the shitty table?” I asked Alberto. Alberto shrugged. We sat down and ordered our pizza.

After dinner Alberto, a doctor, received a call from a patient. Meantime, I went inside to pay. I stood in front of the cash register with my wallet in hand and waited as owner the owner also talked on the phone. Though I was standing near him, he didn’t acknowledge me and continued his conversation. After a few minutes a man who’d been sitting with two women and another man at the table next to us came to pay. The owner hung up, looked at him, smiled, and asked if they’d had a good meal. They exchanged pleasantries, after which the man paid and left.

“I was here long before that other man. Why did you not serve me first?” I asked the owner.

I handed him the money. “I don’t like the way you treat me,” I told him.

He made no attempt to explain or apologize. Instead he ignored me and busied himself with some receipts on the desk.

“Well, you just lost a good customer,” I said. Alberto returned and we left.

Anti-discrimination legislation helps to protect people from overt bigotry and hatred. Unfortunately, no f legislation can protect against the implied and unstated discrimination that LGBTI and other minority people face on a daily basis. Maybe by hitting these nasty bigots where it hurts — in the pocket book — we’ll eventually drive the message across. We are people too, and we deserve respect.