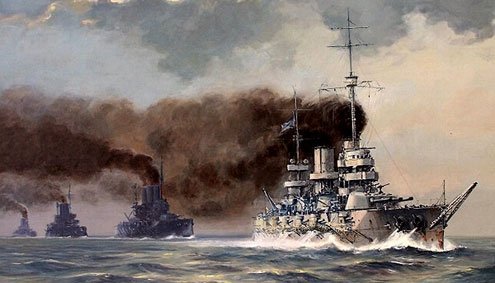 The Russian Black Sea Fleet was once a point of pride for Russian influence.
I

mperial Russia’s most significant early shortcoming was the lack of a major saltwater port. What great European power had arisen and flourished without one? None. Even the ancients, Phoenicia and Greece, Constantinople and Venice, depended on Mediterranean access to extend both trade and influence. Russia, though it craved similar prominence, could count only on its berths on the Baltic Sea; no comfort in icy winter.

This reality propelled increasingly ambitious Russian rulers to poke at Crimea, which opened onto the Black Sea, which in turn afforded a Mediterranean corridor. Catherine the Great founded Sevastopol, and Russia came to measure its growing European clout in terms of access to Ukraine’s Black Sea coast. Finally, it could build, equip and assign a southern fleet.

Long before communism, and before air and missile technology defined military force, the Russian Black Sea fleet was a vital feather in Moscow’s cap. Turkish and European tussling over Crimea — seen as a direct challenge to Moscow — produced lethal spasms that lurched on-and-off for most of the 18th and 19th-centuries. They culminated with the 1853-1856 Crimean War, a near-ludicrous Russo-Western conflict that ended badly for Moscow.

In the years that followed, the Imperial Russian Navy designed and built dozens of dreadnoughts, including the battleship “Potemkin,” whose crew’s 1905 mutiny presaged the 1917 Bolshevik revolution. Later, Stalin’s Soviet Union, chastened by the near-invasion of World War II, used the Ukraine coast to berth missile frigates and construct elaborate nuclear submarine bunkers. Western European nations were not the only ones to say “never again.”

When Ukraine won independence from the former Soviet Union in 1991, Moscow suddenly found itself deprived of this hard-won southern flank. But it did reserve the right to maintain its Sevastopol presence. It signed a series of agreements with Kiev governments to ensure that the Crimean peninsula, historically Russophile, remained under Moscow’s control. Sevastopol and its Russian naval population acquired similar status to the Guantánamo Naval Base in Cuba, where treaty rights protected them and Crimea was a kind of “little Russia” in Ukraine’s south.

Russia negotiated with both friendly and hostile Ukrainian leaders to obtain a 25-year extension on its Sevastopol lease, which is due to expire in 2017. Not surprisingly, Moscow used Ukraine’s natural gas debt to secure leverage. But the negotiation was a bitter pill for Russian nationalists, who still rued the loss of Ukraine and the Black Sea presence that formed part of so-called Greater Russia.

Post-Communist Russian conspiracy theorists insisted that the West — with ethnic Ukrainian leaders complicit in the plot — was actively trying to woo Ukraine into the European fold and destroy what was left of Russia’s European influence. Tensions within Ukraine’s own population deepened after a pro-Russian president controversially took power in 2010, following six years of leadership by figures largely favorable to the EU.

Between 2004 and 2010, Russia had undermined these politicians by refusing discounts on natural gas and occasionally reducing the flow. Moscow’s aim was clear: to offset Soviet-era humiliation by making Ukraine into an economic vassal.

As a result, energy-impoverished Ukraine, not yet enrolled in the European Union, stood on the brink of bankruptcy when its now-ousted president struck a devil’s bargain with Moscow last December. Russia would dramatically reduce the natural gas bill if Ukraine stopped its push for EU membership and considered joining a customs union including several former Soviet states. The deal, old-school blackmail, helped fuel an insurrection that in a matter of weeks has undone two decades of stormy but functional democratic rule and placed Ukraine on the front lines of East-West road rage.

But understanding a crisis also means seeking both context and precedent.

For conspiratorial Moscow, the pro-EU revolt that gained steam in December was part of a well-honed Western “plot” intended to sever what was left of Ukraine’s ties to Russia, thus annulling 300 years of shared history. Crimea and Sevastopol play a key role in the territorial side of that history, as well as in its geopolitical evolution. Any EU involvement in Ukraine would also bring a NATO presence, an anathema to Russia.

In contrast, Europe-leaning forces in Kiev saw Russia as the puppet master in an equal but opposite scheme that installed a Moscow-friendly president (he was in fact elected, though not without outcry) and then pressured Ukrainians to turn away from Europe through natural gas discounts and aid incentives. The insurrection merely exposed the ploy.

All sides are predictably emotional and convinced of their viewpoint. Ethnic Ukrainians loathe the idea of Russian interference and seek pro-European leadership, and funding. Russia perceives the events of recent months as not only a reversal of fortune but also as a potential risk to its point-of-pride presence in Crimea, which it has rushed to defend with exaggerated imperial fervor. Many argue that the “defense” of Crimea is tantamount to an invasion since Ukraine is a sovereign state, and Crimea part of that state. At the same time, it’s unwise not to factor in Russia’s frontier relationship with Ukraine and its leftover paranoia regarding Western intentions, promulgated under two generations of Communist rule. Those intentions include EU propensities. If, for example, a civil war in Cuba saw an armed faction (or more generalized upheaval) threaten U.S. troops and personnel in outnumbered Guantánamo, it is hardly inconceivable to imagine a panic-driven American military response.

Moreover, the Russia-Crimea bond goes back not decades but centuries. Despite being part of Ukraine, Crimea staunchly identifies with Russia. Because Moscow is playing its pro-Russian card shamelessly doesn’t invalidate its existence. Moreover, political Kiev in the aftermath of President Viktor Yanukovych’s ouster is a cauldron of competing passions, an ancient recipe for incendiary consequences, civil war among them.

The situation has reinvigorated the Cold War zeal of Western media who denounce Russian President Vladimir Putin’s “staggering confidence” and his “emphasis on manipulation” — in the words of a London Observer editorial that toes the line of Western scorn toward Putin. The media’s approach has sidetracked salient details about the crisis. Only toward the end of New York Times‘ analysis do its authors acknowledge Crimea’s “large degree of autonomy,” its “strong historic, linguistic and cultural ties to Russia,” and, perhaps most important, that it has been “the subject of military disputes for centuries.”

Mainstream reporting rarely mentions Moscow’s original vision of Black Sea Crimea, and of Ukraine as a whole means in terms of Russian national and international identity. Sevastopol was the port from which Russia, whether tsarist or Leninist, dreamed of launching a thousand ships, and putting flesh on its European bones. Such visions, placed under real or imagined siege can swiftly turn nightmarish, particularly when insults escalate into accusations and diplomatic elbow room diminishes. All the more reason history matters.