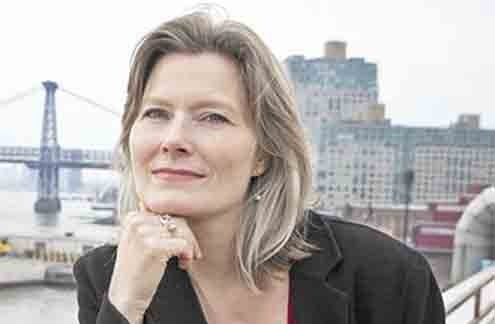 Jennifer Egan's "Manhattan Beach" is a shrewd departure from her past work.
A

merican novelist Jennifer Egan has been reinventing fiction for a quarter century, making it odd that her latest novel seems to head toward the potentially staid realm of historical fiction. Yet in the fact-based grid that anchors “Manhattan Beach”(Little Brown Book Group, London) leaves the resourceful Egan with ample inventive spaces. She loads these spaces with issues reaching from feminism to patriotism, also — and surprisingly — adding a classic American literary obsession: The immanent if mysterious forces of nature.

The opening line, “It all began with the girl,” introduces 11-year-old Anna Kerrigan. Her coming of age tale will lead her to work in the World War II-era Brooklyn Naval Yard. To recreate that period, Egan capitalizes on a full decade of research into the vibrant archives of New York waterside activities, carrying into the pervasive rot of labor union links with organized crime.

But first, it’s all about the girl. One icy winter day in 1934, Anna Kerrigan accompanies her father Eddie to meet Dexter Styles. That racketeer’s home offers Anna her first-ever shorefront view, on Manhattan Beach, facing bay waters and the Atlantic Ocean beyond. She’s immediately drawn to the relentlessly moving currents of the sea.

Removing shoes and socks she steps into the freezing water. “Doesn’t it hurt?” Styles asks. “At first”, she answers, adding: “you get used to it.” Anna’s a doer, a survivor, and a catalyst for the natural world’s pulsating energy. At water’s edge she senses “an electric mix of attraction and dread.”

One way or another, most of Beach’s main cast will be swept up by the sea’s powerful forces. Even so, it seems a push to suggest Egan is delving into the metaphysical inheritance of Transcendentalism. However, and there is a “however,” she certainly flirts around its edges. Just read her prologue, from Melville’s “Moby-Dick” — “Yes, as everyone knows, meditation and water are wedded forever.”

But Egan is on a new roll. Since her 1993 debut, the short story collection “Emerald City,” she’s alchemized the way we read fiction. Her 2010 National Book Award and Pulitzer-prize winning “A Visit from the Goon Squad” is a 20-year flash-forward-and-back account of the entwined lives of pop music scene characters. It’s a bright, jittery tale that reverberates with a new medley of sounds and signs embedded in prose.

Beach’s complexity is different, less concerned with fleshing out character tales than with elaborating issues. It veers toward a risky blend of buzzing historical details and multi-level human concerns. So much so that it’s sometimes hard to keep Anna’s centerpiece role in focus.

That’s not helped by the repetitious recounting of her early youth. She spends years helping her mother Agnes assist older daughter Lydia, a deformed and helpless cripple who can utter only senseless babble. Egan struggles with melodrama. She’s awkward. She mistakes a mix of the pretty and the grotesque for pathos. Lydia’s plight consumes pages while performing only one real function: to make implausible plot developments and coincidences seem more probable.

When Anna, now a young woman, encounters Styles at the docks, she manipulates his offer of a ride home into a Sunday morning trip to the sea, “to help stimulate” Lydia. Ergo: Egan reconnects Anna’s and Styles. The cripple’s subsequent (and miraculous?) use of words, “the sea the sea,” further suggests a mysterious power contained in the watery deep.

Further, in smart flashback, we learn Eddie made that long-ago visit to Styles to get needed money — for Lydia’s therapy, of course. As the dock’s organized crime bagman, Eddie asks Styles to promote him to general liaison. Eddie’s inexplicable disappearance a year later injects a suggestive note of suspense into subsequent chapters.

The breadwinner gone, 17-year-old Anna works in a Brooklyn Yard repair shop, and regularly visits the massive docks. Intrigued by the divers who submerge to check hull damage, the determined Anna conquers male prejudice to become the first woman to wear the 250-pound diver’s “dress.” Egan’s reconstruction of her first dive carries a heroic aura. Thirty feet under, Anna exults in the water’s fierce, insistent pressure, its swelling tides and fast currents.

Not by chance, this episode is a prelude to later chapters tied to submersion. At different times, union henchmen take Eddie and Styles on boat rides to the Bay’s mouth. There, iron ankle clamps tie them to the signature concrete blocks associated with organized crime murders. Both men plunge to the sandy bottom in passages that stupendously evoke experiential perception.

In fact, these passages are so good that Anna’s tale seems mislaid. But no, Egan is also a practiced plotter and soon has her lead back on stage, this strongly sketched personality who overcomes social mores and prejudice to determine her own life.

In all, despite an occasionally wavering focus, Egan’s Beach has much that’s exceptional. Egan’s prose is precisely tuned. And she vigorously revitalizes the classic American theme of powerful and mysterious human actions in combination with natural forces.