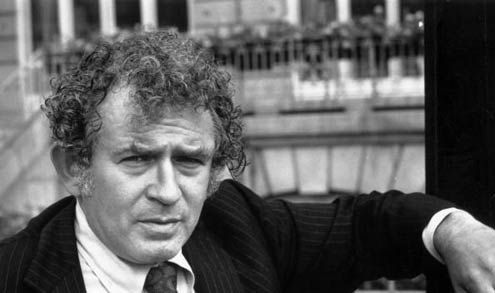 ast night the information-ether sent messages like shrapnel. Systems off and bookcase time. From the top shelf Mailer’s ’84 “Tough Guys Don’t Dance” tempts, but not for long. It’s a forced weave of metaphysical speculation, gay-bashing, and scattershot violence. Overdue for the basement book cemetery. Then, remembering: Mailer died. Last November.

It’s too soon and too late to reject him.

In thirty-nine books, and a Himalayan production of polemic articles and speeches he spoke to us. Shouted. Challenging our country’s entire past half century. First volley was his World War II novel “The Naked and the Dead.” That eviscerated war games and autopsied death of the single within the collective.

It also kicked off his lifetime defense of the unique and idiosyncratic individual. To attack totalitarian prison setups his 1980 “In the Belly of the Beast” brilliantly championed a convicted killer, and helped get his parole. With murderous fallout that only Mailer hadn’t foreseen.

Critics tagged him: beatnik, hipster, renegade, contrarian, outlaw. Fact is: he was too large to label. He chewed on every major issue of our time, and spit it out. Usually in print.

For decades, streetside Manhattan tweeds loudly agreed: “Mailer’s the mouth of New York.” Brawling, boasting, bullying-on the page, on talk shows with Johnny or Ophrah or Dave — it seemed he would never shut up. Now he has. And it’s real quiet. No more Mailer pronouncements. In the silence, you can almost hear the voice we lost.

Not to idealize the man or writer. Mailer took care of that.

As in the early “Advertisements for Myself.” I’m a “White Negro,” he said. By “Negro” he meant: unrestrained sexuality and primitive-instinct lifestyle. That alienated the entire black community. Another chapter depicting sexual relations as perennial pitched battle lost the women’s vote. He never changed or apologized for either position.

But if he relished his counter stance, he did belong to an exclusively male coterie of post Second World War American writers. With Mailer in tough guy/Hemingway pose there soon came Roth, Cheever, Updike, Vonnegut, Pynchon, Jones, Vidal, Styron, Baldwin-in their own masks. They aimed to write “the great American Novel.” Philip Roth used the catchphrase for book title.

From this distance, it’s hard to remember our best writers were so certain our sprawling nation contains common identity. Not for them the micro-histories, inspirational chats, and cultural-niche fictions that stud our best seller lists.

Can we imagine their European contemporaries dreaming, say, of “the great French novel?” No way.

Five years later he ran for mayor of New York. Bellowing from street corner platforms he pounded his fists in the air like a boxer.

He was convinced that in prose, and life, a guy just had to fight hard. Only then he’d capture mysterious signals emanating from a kind of universal, yet somehow American mind. It was a great, and crazy notion. Led him to all those extreme games. To punch out writer-rival Gore Vidal during a talk show.

In the end, his fiction bumbled into rambling tales: star wars involving powerful if malefic figures. “Castle in the Forest,” his final novel, metaphors Hitler as Satan, with near comic results.

But are we sure this wrong-headed writer got the American tale 100 percent wrong? Was it just his raging prose which led us to read title after title? Or did he glimpse some truth about us? Didn’t it all start as the first Pilgrim shoe scraped Plymouth Rock? Right then we started mouthing about Good and Evil, then the Social and the Self, all in various guises: Salem against “witches”; cowboys n’ bandits; cops n’ robbers. Don’t we turn even our most banal domestic sit-com into metaphysical talk show?

Like Mailer, we seem sure there’s some message out there, waiting to be found.

Makes you wonder what he’s up to now. Easy to imagine him kicking the golden portals, announcing his arrival. Easy to picture him brawling and bullying his way to the inner sanctum. Where rumor claims you can locate “the big answers.” To all the questions he posed in his prodigious life and writings.

Ok. So here’s the deal. For one entire day, we’re keeping the message systems on full retrieve. Limited offer. During this next 24: all answers accepted.