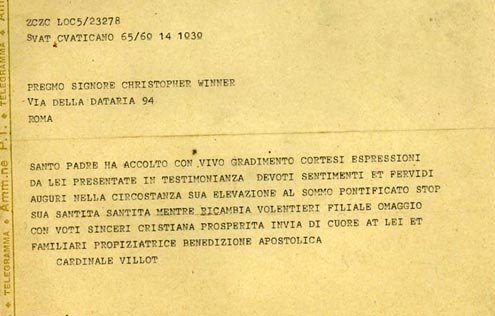 n August 1978, United Press International was among several international news agencies whose Rome offices covered the death of Pope Paul VI and the conclave to elect his successor. Vatican reporters suggested the new pope would almost certainly emerge from a group of staid Italian cardinals, most in the late pope’s inner sanctum.

But the College of Cardinals surprisingly and swiftly picked Venice Patriarch Albino Luciani who took the name John Paul I — in deference to his predecessors Paul VI and Pope John XXIII. The smiling, self-effacing Luciani grew up in the poor and hardscrabble Belluno hills north of Venice. Old friends and classmates in his home town of Canale d’Agordo (known as Forno di Canale until 1964) held him in high esteem.

In Venice, Luciani was described as a man whose skills with people were second to his involvement in Catholic Church politics. He sometimes wanderd chatting willingly to anyone who recognized him. While in Venice, he published “Illustrissimi,” a book of imagined letters to historical and literary figures, including Figaro, Pinocchio, Mark Twain, and Charles Dickens.

While watching him speak gently to gathered crowds during his Sept. 14, 1978 installation Mass, I decided to send him a deeply personal congratulatory telegram, based on my trip north. A day later, unexpectedly, I received reply from the pope, via his French chamberlain, or camerlengo, Cardinal Jean-Marie Villot.

It was one thing to send a fan letter to a celebrity, quite another for a stranger to have a personal back-and-forth with a pope.

Pope John Paul I was soon enveloped controversy. He referred to himself in first person, breaking centuries of tradtion, and soon after suggested that God was “more mother than father,” implictly challenging assumed gender models. In 1974, speaking privately, he’d even questioned the Catholic ban on birth control — “If I were the ‘divine master of the law,’ I would abolish the law.”

Thirty-four days after his election, he died of a heart attack at age 65.

THE HOLY FATHER HAS RECEIVED WITH EXTREME PLEASURE YOUR KIND WORDS OF DEVOTED SENTIMENT AND FERVID CONGRATULATIONS ON THE OCCASION OF HIS ELECTION AS POPE STOP HIS HOLINESS WHILE GLADLY RECIPROCATING YOUR KIND HOMAGE WITH WISHES OF SINCERE CHRISTIAN PROSPERITY SENDS FROM THE DEPTH OF HIS HEART TO YOU AND YOUR FAMILY MEMBERS HIS PROPITIOUS APOSTOLIC BLESSING.