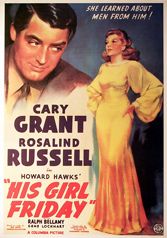 Pound for pound, Hawks’ zesty delight is among the finest romantic comedies ever made (billed in its time as “a whirlwind of a love battle.”) Hildy Johnson (Rosalind Russell) is an ace reporter at “The Morning Post” while publisher Walter Burns (Cary Grant) is her ex-husband and deliciously slick boss. Lindy wants to quit the paper and remarry, but Burns is having none of that. He lures her back with white lies and the promise of a death row scoop.

This is “The Front Page” with sexual politics thrown in. It’s also what happens when words and wit are the best special effects. There are con men, crooked cops, unscrupulous reporters, snake-in-the-grass politicians, and director Howard Hawks lampoons them all with brio. The Keystone Kops wordplay between Grant and Russell, both in their gorgeous primes, has all but vanished from American cinema. That’s because the best comedy puts playfulness ahead of the cynical.

Walter to Lindy: “You’ve got the brain of a pancake. This isn’t just a story you’re covering — it’s a revolution. This is the greatest yarn in journalism since Livingstone discovered Stanley.”

Hildy: “It’s the other way around.”

Walter: “Oh, well, don’t get technical at a time like this.”