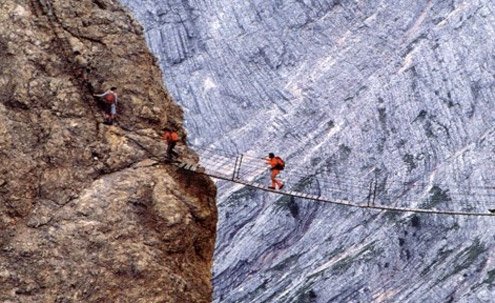 The "Sentiero ferrato Ivano Dibona" sees you walk the Zurlon ridge in the Dolomites, northeast of Cortina d'Ampezzo.
F

erragosto is over. Little did I know when I arrived in Italy more than 20 years ago that August 15 was not just a random date but also represented the apogee of Italy’s collective summertime dream and ushered in the country’s migration from one vacation pole — the sea — to another — the mountains.

Eventually I, too, joined the migration, and when the tone of the fern groves in my American woods turned from blue to yellow, it was time to end my American-style vacation and start the Italian one. So while the rest of Italy lit bonfires and consummated summer romances, I usually spent the August midpoint in the Sahara of Milan -hot and empty-in my underwear, doing our family’s cambio di valigia (seaside suitcase contents exchanged for mountain ones).

Times have changed. I no longer spend the second half of August in Cortina d’Ampezzo. But the other day, Vermont Public Radio announced the Perseid meteor shower, a highlight of Cortina evenings, and I overheard my son sharing the names of restaurants in Cortina with a friend who headed there.

And it all came back to me.

Our annual sojourn in rented houses Cortina was not a summer peak but also represented the apogee of my Italianization. During the rest of the year, my children and I were only partly assimilated (we didn’t wear undershirts and used bicycle helmets). But something in Cortina’s Dolomite air made us go native. Big time.

Post-Ferragosto in Cortina was part of my ex-husband’s vacation tradition. We had a ready-made group of friends and relatives whose children were the same ages as ours. Until month’s end, when we scattered to our school-year homes, we existed in daily disorderly symbiosis.

Making plans with the brown rotary phone that was once Italy’s sole form of telecommunication, we corralled dozens of Italians for mass passeggiate. One. Call. At. A. Time.

We shared daily excursions that evolved from simple walks, to easily-reached picnic destinations, to all-day treks with major altitude changes, not to mention the occasional passage requiring holding on to ropes. We motivated the recalcitrant, timid and fretful with chocolate or drawn out storytelling (my version of the Shoemaker and the Elves is still famous). Children picked blueberries or played with climbing ropes while picnicking on puccia the flat, fennel-seed and rye bread of the Dolomites, local cheese and speck or bresaola (mountain prosciutto, dried beef), and plum tomatoes and chocolate. Scrubby pines perfumed the air and the peaks of the Dolomites seemed to puff out rosy chests against the vivid blue sky.

In the car, jeep or train home, sleep turned tired little bodies into sleepy rag dolls. For them, after-bath was pajamas and bed. For us it was mountain elegance — boiled wool jackets or maybe a dirndl — and the see-and-be-seen aperitivo in town. Dinner might be potluck at friends or dinner in some pine-paneled restaurant that David Niven or Gustav Mahler would still recognize.

In fact, the whole experience was a cross between the sunset of the Austro-Hungarian Empire and 1960s Italy. Mahler had summered in Dobbiaco, which enflamed my ex-husband’s passion for the composer, whose “Kindertotenlieder” he blasted on the car stereo. Our annual bicycle trip to Austria included a slice of Sachertorte with cream. Our hikes followed Hapsburg military roads or paths linking World War I battlefields (clever boys still dug up shrapnel and old mess tins). Franz Josef and Sissi would have approved Cortina’s standard childhood uniform: lederhosen, Tyrolean sweaters and Peter Pan collars.

The houses we rented usually looked as if the owner’s grandmother had decorated them along with the set designer of the original “Pink Panther” movie (filmed in Cortina). Hotel dining rooms featured rites, waiters and foods from the belle époque. The parents of many friends were still vigorous, lending a sense of continuity with their own post-war Cortina visits. Only “Carosello,” the 1960s children’s TV program, was missing.

These links to the past were probably what made it so easy for a WASP from the Midwest to blend in. I recognized rituals from my own childhood. Passing years meant that reminiscences once exclusive to my ex-husband and his friends were replaced by memories to which I too belonged; an epic argument, lost children, a hailstorm. Being outdoors and active in breathtaking scenery was like my family’s canoe trips but with a nice restaurant at day’s end and minus some Protestant rigor.

The Ferragosto of the year I turned 40 was an apogee in an apogee of a sort. Pre-adolescent children still accompanied us willingly. The friends meshed particularly well. Good weather brought so many chances to walk that I —and two forty-turning friends — dared to take the challenge of the Dibona walk. It was eight hours of suspension bridges, sheer drops and slippery gravel and ropes. Safely home, the simple dinner a friend cooked turned into a celebration of vigor undiminished by our fourth decade.

That year was so charmed, I asked our landlord to let us stay into early September. With a few friends, we took last walks on deserted paths and watched the town empty. Days were shorter and exhilaration turned to melancholy. We all sensed something special had ended, which it had for us. But I’m sure it’s all there for a new generation.