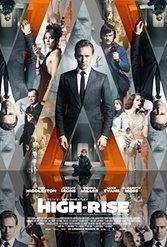 In 1975, British futurist J.G. Ballard published an apocalyptic parable about the British class system using an isolated and insulated high-rise as a metaphor for decay and social chaos. In the vast country garden penthouse was the building’s creator, a man called Royal (pun intended), with his eccentric wife and a horse. Lodged in the concrete jungle’s middle floors was an array of carnivorous and amoral middle class yes-men (like newcomer Dr. Robert Laing). Below them dwelled the distempered underlings, loud and ready to defy authority at a moment’s notice.

Director Ben Wheatley casts chameleon-like Tom Hiddleston as Laing, who after moving into unit 2505 confronts the sexually and socially toxic ecosystem around him. Laing is sandwiched between the “vanguard of the well-to-do” and the social climbers. He sleeps around, going with the edgy flow, until the high-rise’s fabric begins coming apart, factions whipped into warring hysteria.

While Wheatley effectively conveys a lush retro-future in the spirit of “Brazil,” the dramatic tension unfolds tediously. Notwithstanding supermarkets and sleek elevators (that break down often), the high-rise predictably tyrannizes its increasingly alienated occupants. Social-order tinkerer Royal (Jeremy Irons) — a baronial figure from another era — tries maintaining order (and satisfying his sexual appetites) until it’s clear order has no dominion. Welcome then to Ballard’s dead-end, dog-eat-dog world, something the story drives home by opening in the aftermath of the chaos, with the placid Laing roasting a dog on spit.

Wheatley is an exceptional visual artist and his high-rise is an eclectic freak show. The real question is whether Ballard’s socio-political barbs, relevant at the dawn of the welfare-busting Thatcher era, still hold up. Ballard saw the high-rise as “a huge animate presence” brooding over its residents and “keeping a magisterial eye on the events taking place,” a colony in the sky. When single mother Charlotte (Sienna Miller) asks Laing what’s in his many unopened boxes, he replies: “Sex and paranoia,” and there’s a lot of both.

But there’s also a moldy feel, as if the four decades it took to adapt Ballard’s book were at least two too many for a message spiritually linked to a “Clockwork Orange” time when the redrawing of the British welfare system, the end of public housing, and the menace of urban sprawl was top-of-the-charts.