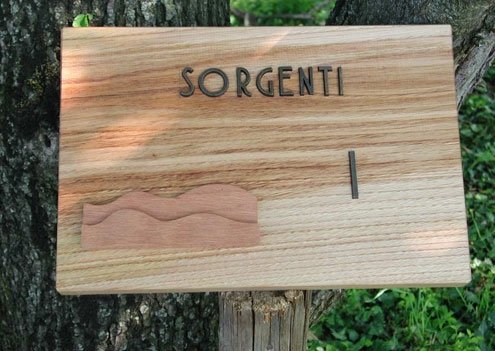 Signs to petrified springs.
A

red squirrel darts across our path. As we round the corner of Cascina Vertaggera, fragrances of rosemary and vinegar mingle in the hazy, September morning air. The acidic odor comes from fruit rotting on the ground, not from the mature grapes on the terraced vineyards. From trees along the path, Marino picks green and red figs. Their flesh melts into sweetness in our mouths.

We are on Montevecchia (479-meters) in the Parco Regionale di Montevecchia e della Valle di Curone, a natural park in the Brianza area of Lecco province in Lombardy. It’s the nearest protected park to Milan. Given its proximity, it’s amazingly green, even though its been inhabited by humans for 60,000 years.

From Milan, we’ve driven north for 40 minutes up highways A51 and 342 to Lomaniga (287-meters), a village near Merate. From the parking lot, we’ve followed wooden signs marking path 8 to Via Cascina Palazzina. The street turns into a trail to Cascina Vertaggera.

Still on path 8, we’re heading to the village of Montevecchia Alta and then into the Curone Valley to explore the park. It’s a long walk without difficult climbing. We enter woods which open to more terraces of vineyards and orchards at Cascina Casarigo, a farmhouse inn and restaurant near Galeazzino.

A cascina is a farm complex typical of the Lombardy and Emilia-Romagna plains. In the past, some housed up to 25 families of farm workers and included barns, granaries and ovens. Larger ones sometimes had a mill, church and school and developed into towns. Some were even fortified. Though many cascine are still working farms, others are now restaurants, country inns or B&Bs.

From Galeazzino, we soon arrive at Montevecchia Alta, a hilltop village overlooking the plains. Its 17th-century Beata Vergine del Carmelo Sanctuary dominates the surrounding countryside. The sanctuary sits on an older, Longobard church built upon a Roman watch post. Nearby, Neanderthals (60,000 years ago) and Neolithic Homo sapiens (30,000 years ago) once encamped.

A sign “all trails” points down stairs. Twenty minutes later, a red-and-white-striped Club Alpino Italiano (CAI) sign marks trail 9. Did we miss something? We hear traffic and follow the path to the road. Cyclists pant uphill. Others race down.

After a steep, sweaty, 20-minute climb, we reach the village of Butto built around Cascina Butto, now park offices.

He buys one and studies it in the parking lot.

A cyclist hops off his bike. “Can I help?”

“Turn right at the Madonna, then left at the first road. It’s trail 11 through woods.”

It’s cooler under the trees on trail 11. Trails 8 and 11 intertwine here. After 30 minutes and past Cascina Valfredda, we see a house roof, Ca’ del Soldato, and trail 2. Ca’ del Soldato is the park’s center and natural museum. It’s closed today.

We take path 11 down to a nearby sorgente petrificante. This is a spring rich in calcium carbonate. The water coats everything with calcium — mud, leaves, moss — and petrifies them into stone.

Still on trail 11, we follow the road across the Curone valley floor, shortcutting through stubble fields. Groups of cyclists whiz down the country roads.

We ascend the path along terraces of grapes and olives. We snatch a juicy snack. A sign points down towards Cascina Galbusera Bianca where construction cranes and signs advertise apartments and biodiversity. Activity around the restaurant is hectic. Banners congratulate Chiara and Francesco on their wedding day.

We climb to a circle of cypress trees on a hilltop and eat lunch. From here, Romans stood watch over these vineyards and the Celts of Cascine Galbusera Bianca e Galbusera Nera. Not much has changed in the Curone Valley. On the other side though, the town of Rovagnate spreads out.

We return to the vineyards and paths and take trail 7. Below us are rows and rows of grapes. Above are abandoned terraces turning back into prati magri, meadows of poor soil on calcareous rock where wildflowers, particularly orchids, grow until the woods reclaim the land.

Where the trail rises to the crest near some houses, we walk to and fro looking for trail signs. According to the park printout, we should find trail 9. The map shows it doesn’t cross trail 7 here. We hadn’t had much luck with trail 9 before, so we opt to stay on trail 7 until it meets trail 6, which leads back to Lomaniga.

Trail 7 takes us through undisturbed wetland woods, a rare phenomenon in such a populated area of Europe. It’s a long, hot, humid, up and down hike.

We arrive at a road and Madonna shrine where trails converge. Paths are marked with CAI signs 20-to-30 meters into the trails. We walk back and forth looking for trail 6.

Marino studies the map. “Not to Sirtori.”

Eventually we arrive at a farmhouse and promptly lose the trail.

“The sign’s on the stone wall.” The farmwife says. “The trail passes right under my windows. Follow the road until you see another road on the left. It’s an hour to Lomaniga.”

We walk and walk, later passing exercise stations in the park. The Torrente Malgoretta flows nearby.

We ask a jogger for directions.

“Before the highway, you’ll see a bridge on the left. That’s the old road to Lomaniga.”

In 15 minutes we’re back at the car. We’ve walked for six hours, stopping only 30 minutes for lunch.

“Not without this.” Marino waves his map.

The park site contains vital information, including tips on what to see, in Italian. English-language information is also available.