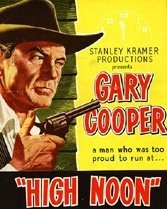 Gary Cooper’s sadness permeates Fred Zinnemann’s classic Western. On his wedding day, Marshal Will Kane (Cooper) learns that Frank Miller, a man he put away, is wants revenge and is headed back to town with his gang. Citizens once 1,000 percent behind the marshal now shrink and peel away, leaving Kane to face the enemy or flee himself. Coming less than a decade after World War II (and with McCarthyism growing), it’s easy to poke around for metaphor. Not everyone answers the call to duty. Not everyone stands up.

Subtexts are also marital. Grace Kelly play’s Kane’s wife. She’s a Quaker who abhors violence; she’s the reason he’s stepping down. So, what next? What else but Cooper’s face with its layers of weariness. This will never end, it seems to say, and winners exist in personal terms alone. This is like witnessing a lifetime in 85 minutes. Lon Chaney Jr. is touching as former Marshal Howe. The real thing.