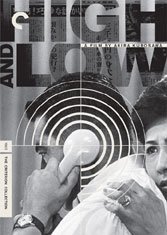 In “High and Low,” businessman Kingo Gondo (Toshiro Mifune) must choose between protecting his business and saving the life of another man’s child. The dilemma couldn’t come at a worse time. Gondo’s fallen out with shoe company executives over creative differences and mortgaged everything to buy them out. But just as he prepares his take-over, he gets an anonymous phone call that his son Yun has been kidnapped. The asking price for Yun’s safe return is every last cent of Gondo’s fortune.

In a twist of mistaken identity, we learn that the kidnapper (Ginjirô Takeuchi) has blundered bigtime. Instead of abducting Yun, he’s taken off with Shinichi, the son of Gondo’s chauffeur Aoki (Yutaka Sada). But the kidnapper’s misstep is really his trump card. He’s driven Gondo into a Catch-22. While he wouldn’t hesitate to save his own kin, losing everything he owns for Aoki’s son is different. What will people think if he lets another man’s son die? The kidnapper — whose motives are more psychological than financial — senses Gondo’s nausea and taunts him. “You won’t let Shinichi die,” he hisses. “You don’t have the guts.”

Japanese director Akira Kurosawa’s agitating drama is a departure from his better known samurai films (“Seven Samurai,” “Yojimbo”). Hitchcock’s “Psycho,” released three years earlier, inspired him. Both films concentrate a disturbing crime into a slow, tidy and unsettling police investigation. The terror arises from the how and why, not the what.

Homage aside, “High and Low” is persistently Kurosawa. Only the cunning get out alive.