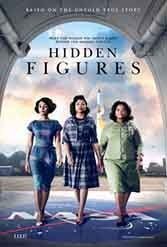 In the early 1960s NASA assembled some of America’s best and the brightest scientific minds in its Langley Research Center in Hampton, Virginia, hoping the group would calculate how to launch an American astronaut into earth orbit. Yet the best and the brightest were not equal — at least not in NASA’s desegregation-resistant Hampton facility.

Director Theodore Malfi’s “Hidden Figures” (he co-wrote the script) covers the story of three black women at Langley. Though racial segregation had been ruled federally unconstitutional in 1954, the women still had to work in an all-black wing. One of them was brilliant mathematician Katherine G. Johnson (Taraji P. Henson). When promoted to the elite all-male, all-white launch group, she had to pour coffee from a pot labeled “colored” and walk to a colored ladies’ room located in a separate building.

There is Johnson’s intellectual ascent within the so-called Space Task Group (she calculated rocket trajectories), Jackson’s drive to become an aeronautical engineer, and Vaughn’s campaign to be officially named the supervisor (in reality, she got that post in 1949). Behind all this work are two romantic backstories. Henson in particular brings captivating power and considerable subtlety to a role that should have earned her an Oscar nod.

Parts of the film stretch credulity. Johnson’s many runs to the distant bathroom grow tiresome. Her reassignment — after calculating Glenn’s flight re-entry — seems improbable, as does Vaughn’s self-taught mastery of an IBM super-computer. A scene of the three women striding together down a NASA corridor is more likely more myth than reality, just as it’s unlikely that Harrison ever took a crowbar to the colored ladies’ room sign.

Like most films based on “true events,” the key words remain “based on.” Still, Malfi’s movie is a superbly structured drama that vividly evokes a little-known aspect of the space race.