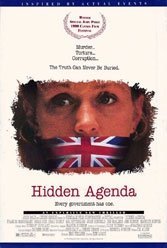 While Loach’s Northern Ireland thriller doesn’t quite match Jim Sheridan’s similarly-themed “In the Name of the Father,” it does milk superlative if performances from Frances McDormand and Brian Cox, with the latter bearing his best knuckles.

In Loach’s fictionalized version, a cop named Kerrigan (Cox) is sent to Belfast to look into the murder of a pro-IRA human rights activist who was gunned down while headed pick up a “smoking gun” tape — one that allegedly confirms British government complicity and dirty tricks. His work partner and girlfriend Ingrid (McDormand) doesn’t buy the party-line police explanation of the murder.

She and Kerrigan, an admittedly unlikely due, team up to dig deeper. Loach’s anti-Thatcher England bias may mar the film for historical sticklers, but it also gives it a thumping pulse, Costa Gavras style. It’s clear enough who the bad guys are, but Loach’s grip on the story is such that it comes out as a documentary indictment, which is of course what he had in mind. Cox’s Kerrigan broadcasts a low-boil disdain that gradually erupts.