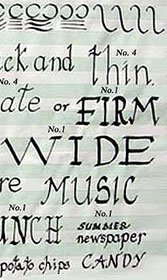 nce upon a time, Many lived in a castle it shared with its eccentric friend Several. Though many considered Many an adjective, several thought of it as a pronoun, which is a noun but more optimistic. Pretty Many was a happy camper. Any time anyone needed a word to describe length or abundance, Many was chosen.

Many was linked to choices, years, decisions, partners, and even marriages — though it had more than a few misgivings about the latter.

Meanwhile, Several sat around waiting for a chance to shine. Meaning more than two but less than Many, Several limited itself to smaller but still dignified occasions. Rooms took a liking to Several, as did guests. So did the sciences, which Several liked best since they usually involved several handsome men working for years at a time on impossibly long equations.

Several even had a short-lived dalliance with Times, which lived in the castle down the road. They broke up after Many arguments. Many were the times when Several sulked home to Many complaining that Times was secretly in love with Many, seeking a union of indefinite possibilities.

One day, a stranger appeared outside the castle walls, demanding to enter.

“I am Proactive,” said the stranger.

Many and Several looked at one another perplexed.

Finally, Many shouted: “That may be true, but why not Get Involved or Take the Initiative, or even the Lead? Better still, why not Intervene, Prevent, Control, Encourage… You have so many choices!”

“You mean you want me to be specific?” said Proactive.

“Many times over,” Many replied.

Proactive looked at Many and Several and hurled a pebble at them, then several, finally many.

“You’ll pay for this,” said Proactive. “My awesome friend will so totally come back and annihilate you both.”

Since Many had been many for four centuries and Several had been several for just as long, they left Proactive to sulk and went back to making fun of A Number Of, who had settled in to play among the talking frogs.

But Proactive was true to its word. It Intervened (a word it rarely used, considering it snooty). Wanting several kinds of woe to befall the many it called its arthritic but still nimble brother-in-law, Multiple.

For decades, Multiple had languished in the closet of the Various, along with a dull mummy called Numerous.

Poets eschewed Multiple, distracted by the word Eschew. Most others thought Multiple was better suited to mathematics. Bartenders never served it, calling it a “dumb number.” Multiple commiserated with Various and Numerous as poets fondled Eschew, usually taking her home.

Multiple harbored no ill-will toward Eschew. After all, her kind was numerous. If Multiple had a bone to pick, it was with Many. Dull mummy Numerous and closeted Various both encouraged Multiple to resent Many, but it was only when Proactive showed up that Multiple grew enraged enough to engage.

“Dude,” said Proactive, “you consist of, include, and involve more than one, which is, like, well, you know…”

So what kind of plan did Proactive have?

“A Proactive one. We go to the castle and like, well, you know…”

Along the way, Proactive and Multiple killed several poets, made Eschew nervous, and took heart from wandering mathematicians who addressed the twosome as Herr, which they liked.

When Many woke up on a Tuesday, Several had bad news: Proactive was at the gates, this time with Multiple, who overnight had turned fruitful and surrounded the castle.

Many tried to reason with Multiple: “I’m simple. I’m easy. I do no one any harm. Same with Several. We’re both short and specific. Can you imagine a world without Many and Several? We can’t.”

Multiple scowled. The world had gone too long with simplicity, said Multiple. Now it needed many multiples and a proactive reign of integers addressed as Herr.

“Multiple is the new Many,” said Multiple. “Deal with it. You’re toast.”

“Bro’s got a point,” said Proactive, who was standing nearby.

Now Multiple and Proactive share the castle. Cousins Yo and Dude own a nearby brothel called Awesome, run by Eschew’s eldest daughter Text. Meanwhile, Many and Several forage for crumbs in the Tundra of Sieves, which is where adjectives age and whither.

Though Multiple rules, it also sulks. “I’m ugly,” says Multiple every day of its life (before taking its meds). To which Proactive inevitably replies: “Who cares?”