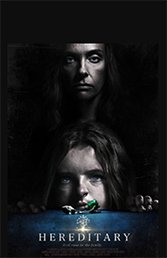 Annie’s aging and demented mother has just died, in some respects not a moment too soon since mother and daughter often loathed each other. “My mother,” says Annie at a funeral service, “was a secretive and private woman. She had private rituals, private friends and private anxieties.” The word rituals is a tip-off, since early into writer-director Ari Aster’s unsettling story, it’s clear that Annie (Toni Collette, brilliant throughout), mother of two, is still caught up in her mother’s eccentric if not Satanic web. She paints miniatures, has a history of risky sleepwalking, and resents her 13-year-old daughter Charlie’s paranormal ties to her beloved dead grandmother.

So it is that Charlie turns sullen, cantankerous and detached, distancing herself from her mother, father (Gabriel Byrne), and older brother Peter (Alex Wolff). Then comes a macabre accident in which Charlie is killed. Peter, the child Annie never wanted and her mother ignored, is in part to blame, provoking the wrath of two women, one of them dead — a clever and fiercely surreal conceit.

Targeting Peter is Aster’s first decisive gambit in what evolves into a haunted house movie with demonic overtones. Hell is what’s hereditary, whether disguised as mental illness or tilted toward the openly ghoulish.

Charlie’s restive spirit corrupts all, driving the remaining family to the brink and ultimately beyond. Even husband Steve, a psychiatrist and the putative voice of reason, sees bewilderment turn to horror as his household falls apart.

Ghosts are one thing, Satan worship another, and Aster won’t quit. He’s out to make good on the ominous and succeeds.

Throughout, his film is visually arresting and paced by Collette’s descent into Hell or madness, or both at once. In this story, spells do not exist to be broken but to be honored at any cost. There are no victims, only new draftees.

The long-underrated Collette does some of her best work in years. Byrne looks like a man suitably over his head. Both Wolff’s Peter and Milly Shapiro as Charlie hit all the right notes. Here’s a quietly vengeful chiller that bathes all in insidious twilight and creates a functioning East Coast household only to decimate it.