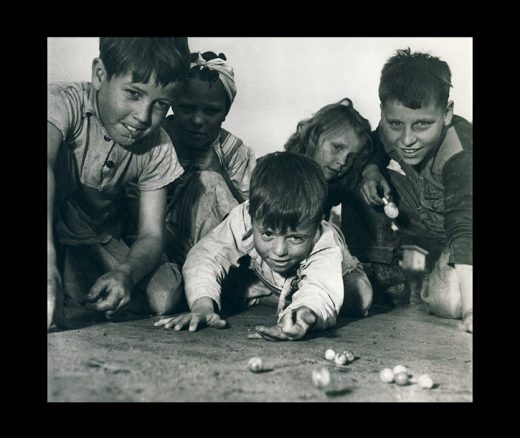 Being a tomboy in Queens meant mixing it up with the locals and their marbles.
W

hen I was a kid we lived in the Pomonok housing project in Flushing, Queens, a half hour’s subway ride from Times Square. This was long before the projects turned dangerous and the borough went Asian. The car-free playground just out the door always offered a glorious assortment of games, and after school I’d play punchball with a spaldeen (a tennis-size ball without the felt), run bases, shoot marbles, play jacks, or jump rope with a clothesline chanting “Policeman policeman do your duty/Here comes Susie the American beauty” until my father whistled out the window or it was too dark to catch the ball, whichever came first. My usual means of transport was clamp-on roller skates.

I’d chant “Policeman, policeman do your duty/Here comes Susie the American beauty” until my father whistled out the window or it was too dark to catch the ball.

Everyone stayed home from school on the Jewish holidays, even the black kids, with the exception of me and a few other red diaper babies (kids of communist sympathizers) unfortunate enough to have principled parents. I remember two ways a marginally better-off kid might lord it over the rest of us: to own a baseball glove, and to play potsy (that’s Queens for hopscotch) by tossing a red checker instead of the standard-issue bottlecap onto the squares.

There were other tomboys on the playground, but I was the only one who convinced my mother to let me wear boys’ shoes under my dresses — in the 1950s that meant not sneakers but Buster Browns with leather soles — so I could run faster.

We had a piano for my father to play Bach, Mozart, and Count Basie. At age four I sat down on the stool as he did and slammed my open hands on the keyboard expecting music to come out — I still remember my shock at the cacophony! I got to start piano lessons afterward, learning to read notes about the same time I learned to read words.

Manhattan, 1954, photo by Vivian Maier: not everyone played marbles.

In 1954 I was scheduled to be a guinea pig for the Salk polio vaccine but I hated injections (and still do, which is why I’m so good at giving them). My mother spent hours giving me make-believe shots with a bobby pin so I wouldn’t pull my arm away at the moment of truth. She told me I had to get used to needles because I would need them to take away the pain of having a baby — an issue fresh in her mind since my little brother was just two years old. At the last minute I caught a cold and didn’t get the vaccine after all, disappointing everyone except myself. When they taught us in medical school that some of those first vaccine batches hadn’t been adequately inactivated and had given lots of kids paralytic polio, I took it as a sign of personal grace.

My health suffered no serious threats. Perpetual scabs adorned my knees — when my mother once hinted there would come a day when I would no longer have them, I didn’t believe her. I landed on my coccyx while roller-skating and couldn’t sit down for a week, I split my chin open showing off at potsy, and there were warts to paint, but no broken bones and no appendicitis. I even managed to hang on to my tonsils.

Sure, Pomonok has changed over the decades, but some things never change. “Residents are born, raised, and never leave here,” one denizen told me. So, next time you hear anyone bad-mouth “the projects,” maybe you’ll remember my kiddie heaven.