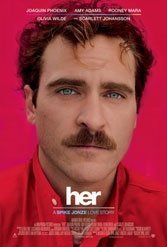 Spike Jonze’s melancholy but highly provocative film takes an old premise and tweaks it to fit incipient 21st-century realities. Theodore Twombly (Joaquin Phoenix) is a ghostwriter for an in-the-near future L.A. venture that tailors personalized letters. He’s separated, self-absorbed, and craves the attention of a woman to fill the abyss that is his emotional void. His wish comes true when he falls for the voice of Samantha, the artificially intelligent “being” crafted by his intuitive, next-generation Operating System. His OS is his reassurance.

Though sentient Samantha lives in a computer — it’s Scarlett Johansson imitating an updated “Bewitched” companion (also named Samantha) — she soon acquires a deft sense of her “companion,” and, unexpectedly, of herself, morphing into both suitor and girl Friday — a delicate reality destined to complicate the lives of human and human-like program.

Jonze is pounding at two basic themes: the first is the creation of a level playing field in which disembodied artificial intelligence can cavort and assert itself, with romance its likeliest destination (complicit Johansson’s affecting voice, a “sweetheart” upgrade on the HAL computer). The second, and more important, is the human craving for unconditional love, which few human relationships allow to flourish without speed bumps and worse. From the start, Samantha is empathetic, generous, perceptive, jealous, caring and candid: the male dream of a tender, low maintenance, forever loyal companion — the intelligent pet. Soon, however, her abstract yearnings turn Pinocchio-like, and Jonze adds variations on surrogacy and sharing (recalling saying, “A bird can love a fish but where would they live?”)

This is a bright light of a film that asks a great many important questions about the most elementary needs of the species. It’s the way Jonze chooses to go about it — giving a traditional love story a different set of legs — that makes this a memorable slice of filmmaking.