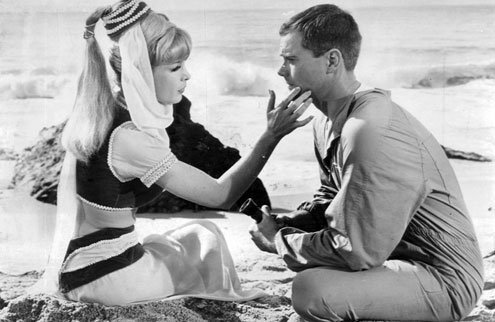 Barbara Eden and Larry Hagman in "I Dream of Jeannie": what's a master to do?
I

n the mid-1960s American television concocted and aired two silly but supremely important sitcoms that crystallized the pre-feminist era. One, “Bewitched,” was about a housewife who is also a witch but mostly uses her powers benignly and in any case is blindly dedicated to her husband, a not-very-bright ad agency exec who finds her eccentric. The second, “I Dream of Jeannie,” made the lead male into an astronaut, but one who has inadvertently stumbled on a genie who makes his every wish a command — sometimes mischievously — and calls him “master,” which he doesn’t particularly like (but what’s an astronaut to do?).

I watched both these shows as a boy and diligently paid attention to the male-female silliness, which seemed in some way reassuring. I liked the actresses, developing modest crushes on both, and, with no mother at home, felt pleasantly hopeful about eventually finding a kind witch or an endearing genie. Given the choice — now available — between Internet porn and TV fantasy, I’m grateful to have been weaned on the latter, since these oddball, unreal characters were at least dignified, polite and compassionate. The only thing hard core about the two shows was the mischief, and even that was corny. Lust and sexual compliance, which may have lurked between the lines, failed to penetrate my 10-year-old brain.

Naturally, the witch and the genie fell by the real-world wayside when I met real women, who at the time eschewed make-up and preferred paying for their own meals. Dating was an exercise in equal footing. So were sexual encounters. To me, this emancipated sexual balance became the norm. TV fantasy was archived, but not forgotten.

Ironically, however, as I grew older, and into middle age, the emancipated pendulum froze in its tracks, and soon in fact began swinging backwards.

Lavish femaleness returned, only this time often bereft of style. The silly servitude of witch and genie was revived first into the model world, and later into the porn world, with women as extended adjuncts of male sexual fantasies. The veneer of sweetness associated with the male-driven shows of my youth collapsed, replaced by shameless craving and its satisfaction. Gone from pop fiction was the absurd middle ground of winks, nods and double-entendres. Witches and genies, though still present in parody, spent less time charming and more time getting naked. I pity today’s 10-year-old boys, their lives dominated by online fantasies — games or videos — that are considerably more sexually graphic and almost entirely lacking in silliness.

Interestingly, though, the witch-and-genie effect hasn’t vanished. For some, it’s only changing shape. Take filmmaker Spike Jones (born Adam Spiegel) whose recent film “Her” is a 21st-century rehashing, albeit a melancholy one, of 1960s themes.

In it, he creates a male character — Theodore Twombly (an intentionally awkward name) — that is not a military officer or an astronaut or even a traditionally established male figure. Instead, he’s a late thirty-something L.A. man with a broken marriage and nothing much in the way of affectionate companionship.

The solution is up witch-and-genie alley. He falls for his Operating System. Yes, of course, she’s disembodied. But she does phone sex, is loyal, calls him sweetheart, arranges paperwork, whispers sweet nothings, in essence supplying exactly what the shows of the 1960s were getting too under their comic surface: unconditional love. For the put-upon men of the shows, their supernatural women were wondrous and intelligent pets with powers well beyond those of men, because — and this was built into culture — what did men really know about women? Aside from, “Can’t live with them, can’t live without them…” little.

What the sexist shows of my youth harped on was domesticity as a form of loyalty, and perhaps the only form men were smart enough to recognize and desire — which in turn might keep them from straying. Why wouldn’t they stray? Because their women were mischievously clever enough to invent daily surprises, refreshing their sexuality and desirability in the process. Again, all this lived between the lines.

Those lines are all gone in Jonze’s movie. His Theo is a sweet and sad man who gradually grows dependent on an entity that wants badly to be human but doesn’t have the means. She — Her — is the perfect woman no man can have because she doesn’t really exists aside from how she’s imagined by the someone who needs her company. It’s the 21st-century in a melancholy nutshell. Systems are speech until they break down. Devices seem sentient until they fail to work, or to produce the necessary number of friends. Craving is rushed, boxed, and delivered, with the delivery doing no more than satisfying an urge and producing its identical follow-up, namely the wish to reorder, to “re-feel.”

This is the cycle. It lacks comedy. It lacks silliness. It lacks archetypes, male or female. It exists in the absence of outdated gender-mocking witches and genies, and their tomfoolery. It is postmodernism in its purest form, bereft of caprice.