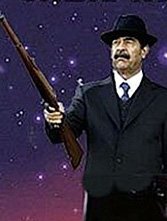 Saddam Hussein says murders committed under his tenure are his responsibility. The regime’s men, including wicked relatives, manhandled because he gave them license to do so. Only a deposed autocrat extricated from a ditch by invasion troops and emboldened by intransigent vainglory would addict himself to such drama. That is at least a feasible theory.

But I suspect the anti-contrition stems from a more meaningful source.

What is happening in Iraq is what Saddam self-engineered himself to avert: Civil war.

Ba’athist thinking depended on visceral projections of a secular Middle East state. Consolidation generated testosterone — Nasser, Hafez al-Assad, Gadafi and (to a lesser extent) Saddam all sought to obliterate Israel — but it was vanity and national aggrandizement that underwrote most political trends. Saddam’s Kuwait whim was pure bullying. As Israel proved on two occasions, the bullying had battlefield limitations. Arab states were bad frontal fighters.

Ineffectiveness notwithstanding, Assad’s ruling Alawis knew the stakes in controlling the secular game. They’d seen (and been alarmed by) Iran. Assad killed Muslims by the thousands in Hamma and Aleppo at the slightest hint of uprising. Nasser’s nationalism pre-empted zealotry, but Anwar Sadat (slaughtered by radicals in 1981) and Hosni Mubarak (a kind of Prisoner of Zenda in the present) fared unevenly with militancy.

For years, Jordan and Saudi Arabia pretended to hover above the fray, disingenuously using royalty as a moderating clause. The late King Hussein was too elegant to be seen as mean.

Iraq was the key player in this outsized tinderbox, standing between radicalized Iran, sycophantic emirates, and three-timing Saudis. Saddam, in turn, was its consummate necromancer — Somoza, Pinochet, Videla, men with magnifying glasses and ants to burn.

He fathomed his role well before it was systematically established in Western terms. He would kill or appease Sunnis and Shiias (much the way Tito manipulated the former-Yugoslavia) and build a cult of personality to slay pretenders. A tyrant is usually an accomplished side-tracker who diminishes internecine envy and hostility by converging their emotions onto his person.

To divert, he warred with Iran through the 1980s. If he neither won nor lost he might at least manage inner conflicts and please those — like the Reagan United States — who recognized him as a dissolute but useful middleman among more ominous ayatollahs.

In regions of rage, secular tyrants stave off disintegration by using dread to offset ethnic and religious apprehension. Democracies, by contrast, are undone by such apprehension and respond militarily.

By cynically singling out Saddam to fix the repugnance of September 11, the Coalition of the Willing (a mockery at this point) collapsed the crucible state in the Middle Eastern puzzle. Here was Saddam, by now a third-rate dictator, removed by freedom’s lackadaisical bulldozers only to invite the rabid sectarian strife he anointed himself to squalidly keep at bay.

It’s morbidly fashionable to believe the ongoing Iraq enterprise deserves persistence. Deserting it, say American liberals and putative Iraqi democrats, is irresponsible, which is to say guilt-inducing. But the original irresponsibility was the born-again refusal to recognize the useful expediencies of keeping Saddam in play. Successful democracy is most often indigenous and self-spawned. It is not (unless restorative) a migratory enthusiasm planted by goodwill troops. Nor is it a metaphor for redemption. These are myths of ethnocentric convenience.

”I understand,” Condoleeza Rice said recently of Iraq, “that the United States has had to do things in the world that are not that popular in much of the world.” Saddam spoke in much the same way defending his own three-decade management.

The ferocity of the in-country quarrel makes it exceedingly likely that Iraq will slip back into amoral secular hands — whether in five years or in 10. By then, few will care.

Is it then so despicable to suggest that Saddam’s “henchmanship” had practical recompense in a borough where love lost is a ritual?

The United States studies withdrawal options as a punch-drunk state totters. Far from teething pain based on incipient pluralism (the Rice view), this is ethnic mutiny compounded by profiteering.

Under him, Iraq was a lay police state, a thug in a many-tiered ghetto. But thugs strike deals with police. Pressed, they bargain. They are the lesser of evils in the bazaar of dread.

Radicalism of all kinds lusts for a common battlefield. Iraq is perfect. It is a theater for anti-rational rebellion (and a place from which to romanticize it for export). The removal of Saddam has built a playpen for those who wished carry the wholesale effect of sectarian conflict from the Near East to Europe.

Operation Enduring Freedom righteously cancelled a bad guy determining, in effect, that anything would be better. Welcome to anything.

Would Saddam’s Iraq have tolerated Iran’s nuclear aims? No. Nor would Tehran have toyed with his patience.

So let us now praise them, these secular tyrants whose contamination we once nourished as an antidote to the whirlwind, only to ignore our own best advice and whip up the storm.