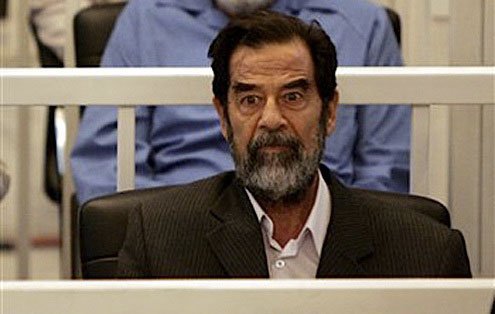 Saddam, above, and Adolf Eichmann in his Jerusalem glass booth in 1961.
D

They are caricatures, deflated vampires.

Nay to this, nay to that, acolytes (both of them) to the aphorism that to attack is the best defense.

Not up to him, snarled Saddam, to acknowledge his accusers. Not up to him to reckon with a “so-called court.”

Saddam’s first appearance in Baghdad differed from Milosevic’s in The Hague only in that the Serb insisted shrewdly on self-representation — a bit of gamesmanship that delayed the trial (soon to enter its fourth year) and ultimately curdled its news value.

Saddam’s case won’t drag on that long. American officials, in a wartime hurry to make a pre-war point, are unlikely to allow Iraqi prosecutors UN latitude.

This is, after all, Iraq’s first taste of O.J. Simpson-style drama.

There is television and audio, sketch artists and transcribers; few are the indifferent onlookers.

But if something about the endeavor seems clumsy, even tawdry, there’s a reason.

The process is flawed.

And perhaps even the premises. But I’ll get to that later.

Only propaganda trials in recent times have mesmerized the public at length. They did so because they dealt — properly in some cases — with retribution (and revenge, though the word was taboo).

Lenin and Stalin Soviets staged hundreds of operatic trials and executed tens of thousands. The Nazi trials at Nuremberg shamed the enablers of the monstrous, sparing few. The glass booth prosecution of Adolf Eichmann in Jerusalem rhetorically peddled a foregone conclusion. He was convicted and executed.

Effectively punishing tyrants depends foremost on routing the tyranny, humbling the vanquished, and enlisting public support for institutional reprisal. The ingredients depend on one another. The Soviets cowed out-of-favor prey with grotesque accusations; the Nuremberg prosecutors — with Auschwitz in full view — required no such ploys. The Eichmann trial, televised live, was a redemptive morality play.

Saddam and Milosevic don’t qualify for these categories because their vanquishing is either incomplete or unpersuasive.

Both are clannish, megalomaniacal nationalists sustained and supported by thug sycophants (many of them relatives) who isolated them from the systems they purported to control.

They can effectively deny their guilt — at least to themselves — because the consensus necessary to assign one-way blame simply isn’t broad enough.

Pessimism and resignation come into play when the aftermath of a vanquishing yields only anticlimax.

Tyrants deserve shaming, yes, but what if the shape of post-tyranny is chaotic enough to generate wooly nostalgia for the familiar?

What if a nation purged of its personal Nazis comes up immediately against a menacing array of more sudden and informal oppressions? How can such a nation, its religious wounds now exposed, trawl successfully for catharsis?

Serbia in this respect is far better off than Iraq.

But it was cajoled, not invaded.

And furious Serbs finally evicted Milosevic, some with reluctance.

Iraq was instead pried, almost unilaterally, from Saddam’s weakened grasp. The consequences of that well-intentioned prying —if well-intentioned it actually was — have made an already ruined nation available to internal strife and neighborhood meddling.

If secular Saddam is smug it because this situation in part rationalizes the intentions of his tyranny. It does actually do so, but perception outweighs actuality when the chips are down.

The Soviets prosecuted to frighten and consolidate, the Americans at Nuremberg to moralize and influence, the Israelis in Jerusalem to heal and vindicate.

But as anointed winners in contests between good and evil they claimed coercive power over compassion, justice, and vitriol.

That is hardly the case with the “winners” in Iraq.

Not in nation with a hastily-assembled system of jurisprudence spruced dubiously into shape to put Saddam on trial.

To try a deposed dictator before the country he ran is stabilized requires imagining a social order that doesn’t exist. That is no less arrogant than the dictator’s own insistence that he is above judgment.

“How do you calculate things?” Saddam mused to Dan Rather in a 2002 interview. “You measure things by the final results.”

So far, Iraq’s results indulge those inclined to humor nostalgia’s easy folklore. Ironically, Saddam may receive both comeuppance and rehabilitation.

It’s as Randy Newman sang in “Rednecks,” his ironic homage to Georgia Gov. Lester Maddox: “Well, he may be a fool but he’s our fool, and if you think you’re better than him you’re wrong.”