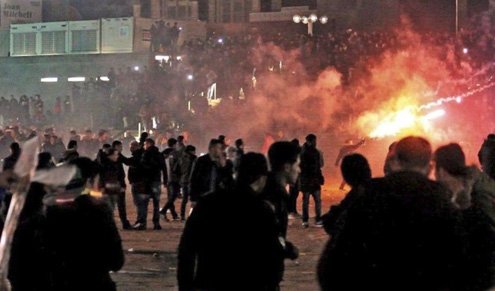 Before complaints began streaming in, Cologne police described the New Year's Eve scene as "relaxed" and labeled the participants "revelers."
A

s I leaned over my desk to pass a note to one of my best girlfriends seated in front of me, I felt a hand cup my behind, squeezing. I spun around to face the tall boy behind me. He smirked and the other boys laughed. Reflexively, my fist went for his face, though because of our height differences I only managed to punch his upper arm.

For the record, I was wearing jeans and an oversized shirt, a popular look at the time. The reason why I’m even telling you what I was wearing should made it clear how conditioned I am as a women to defend myself and my sexuality.

Our teacher, an older woman with a perpetual look of wrinkled exhaustion, saw what happened and promptly sent me to the principal’s office. I complained to her, explaining how it started. With a sigh and a wave of the hand, my groper was sent along as well. An afterthought. In the hallways leading to principal’s, my groper taunted me. He laughed. “Why you got to be so mean? Can’t you take a joke?”

It wasn’t anything I hadn’t already come to know. It was the 1980s after all. Snapping bras and copping feels was commonplace in the halls of many American junior and high schools. Between classes, girls battled though mounds of pubescent bodies, sometimes smacking away wandering hands.

Once in the principal’s office, each of us gave our accounts. The boy stuck to his “it was just a joke” theme and I stuck to my” I don’t care if it was a joke” stance. The principal listened quietly before ruling on our case.

The boy was sent back to class, while I was sent home for the rest of the day and the next — suspended for violence. “Jennifer, you can’t go around hitting people,” he chastised me.

“But he grabbed me!”

I felt as though the one man who should have helped, the principal, had shunned me.

My mother picked me up. After hearing my story, she told me I’d face no punishment at home. I remember the rage in her eyes. She was quiet, but what could she do?

Some 30 years later, more than 1,300 women out celebrating New Year’s Eve in the German cities of Cologne, Hamburg, Stuttgart, Frankfurt and Düsseldorf were robbed, beaten and sexually assaulted. Some were severely bruised by groping. Two rapes were reported. Cologne got the worst of it. Police received 800 complaints. The blame was pinned on “drunk and aggressive” thugs.

But that’s not the point. These events happened in public. Onlookers, fearing for their own safety and wellbeing, apparently did nothing to intervene. Ample media coverage made no reference to solidarity or defense of the assaulted women. Though a few men did intervene, most people came forward as eyewitnesses after the fact. In the end, the very people who should’ve helped the women — fellow citizens and police — did nothing. In fact, early police reports called the mood “relaxed” and labeled the participants “revelers.”

Protests of all kinds followed. Political and woman’s groups got involved. Ethnic hatred flared “The crimes were committed by a group of people who from appearance were largely from the north African or Arab world,” said the Cologne police chief. Politicians issued statements. “The despicable attacks on women will not be tolerated,” said Heiko Mass, the German justice minister. “This is obviously a completely new dimension of organized crime.”

But what I keep asking myself is something more basic: Why didn’t anyone help? Yes, the thugs were organized and plentiful — up to 1,000 young men, at least in Cologne. But should that matter when comes to defending a human being in need?

Cologne Mayor Henriette Reker poured salt on many wounds by recommending young women modify their behavior, “to prevent confusion and explain the difference between the festive mood and behavior [on the one hand] and promiscuity [on the other].” But this was New Year’s Eve. The women were out celebrating in groups. They did not provoke their own attacks.

Reker made other recommendations, again focused on women. They should stay at arm’s length from strangers and, if need be, seek help from passers-by and police and get others to “bear witness.” Yet that’s mostly what they did, to no avail.

Reker was playing principal, but decades later the result was the same.